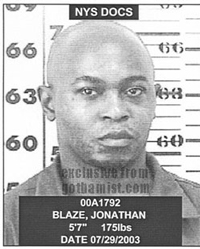 The Brooklyn judge presiding over the case of Darryl Littlejohn, the suspected murderer of John Jay graduate student Imette St. Guillen, wants the trial to start as early as next January, even as Littlejohn is facing unrelated charges of kidnapping in a Queens courtroom. Judge Cheryl Chambers ordered another pretrial hearing for October 11 and wants both the defense and prosecution to come to a mutually agreeable date upon which they can get the murder trial moving.

Littlejohn is the one-time bouncer at a now-closed SoHo bar who is accused of abducting the inebriated grad student (in criminology, no less), raping and murdering her, and then dumping her body alongside a Brooklyn roadway in February 2006. Just last month, people were speculating that perhaps the Brooklyn DA's case was particularly weak, because people couldn't understand why a widely publicized murder case was taking a backseat to unrelated charges of kidnapping in Queens. There is a statute of limitations on the Queens charges and the Brooklyn murder and abduction charges could be held open indefinitely, but some people remarked that the deference to lesser charges was unusual.

Belying any speculation about the weakness of the case against Littlejohn, The New York Sun reports that the Brooklyn district attorney's office is ready to go to trial. It is Joyce David, Littlejohn's defense attorney, who is asking for more time to digest the 10,000 pages of evidence that prosecutors turned over to her in June and would like more time to prepare for trial. During yesterday's hearing, Brooklyn prosecutors gave David a copy of a letter threatening the life of her client, she simply shrugged, saying, '"This is not the first one he's gotten."

In the meantime, Littlejohn is scheduled to appear in a Queens courtroom a week from today to face charges in the 2005 kidnapping, assault and robbery of teenager in that borough.