A Queens jury found a man not guilty of driving while high earlier this month after holes emerged in the arresting officer's account, and the officer's Facebook posts showed him praising a motorist ramming into a crowd of Black Lives Matter protesters.

Shortly after midnight one morning in November 2014, Officer Jordan Bistany, driving a police car disguised as a taxi, pulled over a man named Alberto Rodriguez as Rodriguez drove in a BMW sedan on the Cross Island Parkway. Bistany is part of a Queens Highway Patrol unit dedicated to busting drunk and otherwise intoxicated drivers. Rodriguez is Hispanic, and was driving with a female African-American passenger. At first glance, Rodriguez's case seems fairly straightforward: after Bistany pulled him over, Rodriguez acknowledged that he "smoked a blunt" 20 minutes prior, and that he didn't have a valid license, according to Bistany's account.

In the course of a week-long trial, Rodriguez's lawyer acknowledged that Rodriguez smoked marijuana and refused a urine test, and he had indeed been driving with a revoked license. However, other problems became apparent with Bistany's account. For one, Bistany testified that Rodriguez had weaved from the right lane into the center lane four times. He couldn't say how far Rodriguez's tire had gone over the line, but more importantly, he couldn't articulate a traffic law violation that Rodriguez had committed, which officers need to establish probable cause to pull someone over. Merely crossing into another lane on the highway isn't a violation unless it interferes with the safety of another driver.

Bistany said in court that he saw Rodriguez weave just after Rodriguez merged onto the Cross Island from the Long Island Expressway, that he pulled up alongside Rodriguez to see if he was texting, and when he saw that he was not, pulled him over.

Highway patrol cars are equipped with dashboard cameras that are constantly recording and erasing footage, so that when officers hit "record," the devices preserve the footage from 30 seconds prior. Bistany said that the whole sequence of events from first seeing Rodriguez to pulling him over took "just under a minute," but he had no dashcam footage to back up his account. Asked why he didn't activate the camera, he said, "I forgot..I just forgot."

Bistany testified further that when he approached Rodriguez's car and Rodriguez rolled his window down, Rodriguez had weed crumbs all over his shirt and pants. Yet he produced no weed crumbs as evidence, and never tried to search Rodriguez's car to see if any could be recovered. The crumbs, he said, all fell onto the highway when Rodriguez stood up, and retrieving them would have been too risky. Rodriguez was not charged with marijuana possession.

Perhaps most damaging to Bistany's credibility was a series of Facebook posts that Rodriguez's lawyer Steven Epstein brought up at trial. In one post, Bistany shared a video of a driver in Minneapolis plowing into a crowd of Black Lives Matter protesters with the caption, "My new hero." In another, he wrote that he would enact a "slowdown in arrests because of actions of police officer [sic] De Blasio as it relates to the black mambazo," according to testimony by Epstein. "Absolutely no enforcement action in the form of arrests and/or summonses is to be taken unless absolutely necessary and an individual must be placed under arrest in relation to the statements of mayor De Blasio," Bistany wrote. 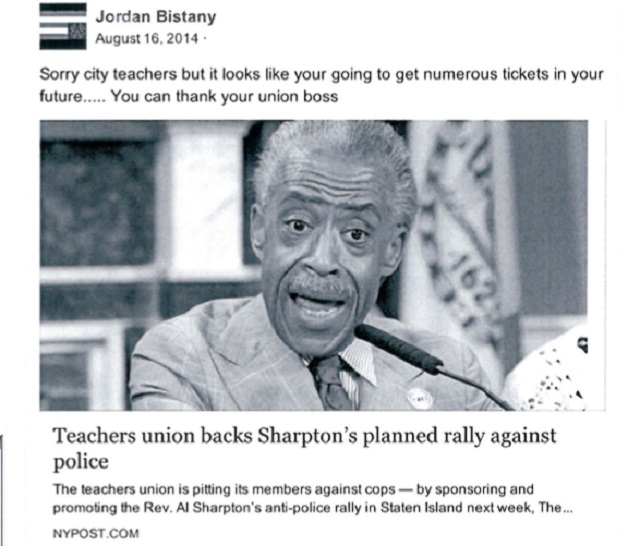 Bistany wrote these and other similar posts around the time of the late 2014/early 2015 NYPD slowdown in response to the mayor's perceived lack of support for police, amid Black Lives Matter protests and the politically motivated murder of two officers in Bedford-Stuyvesant. In another post mentioned during the trial, Bistany linked to a New York Post article about the United Federation of Teachers endorsing an anti-police-brutality rally being organized by Al Sharpton: Bistany wrote, "Sorry city teachers but it looks like your going to get numerous tickets in your future..... You can thank your union boss."

Asked in court if he wrote this, he said, "I don’t recall. Maybe I did." He said he hadn't actually tried to pull over teachers. Regarding the police slowdown post, he said, "I believe I copied and pasted that…I didn’t follow through, but like I said, my activity has remained exactly the same as it always was." Bistany said that the posts were jokes. Epstein pressed him on this, saying, "You joke about that? You joke about people running into crowds of innocent protesters?"

Epstein made the case that Bistany had no justification for pulling Rodriguez over, that he did so only after seeing Rodriguez and his passenger, and that although Rodriguez copped to smoking weed, Bistany failed to establish that he was too high to drive. On this last point, the jury agreed, acquitting Rodriguez of driving while impaired, a felony. 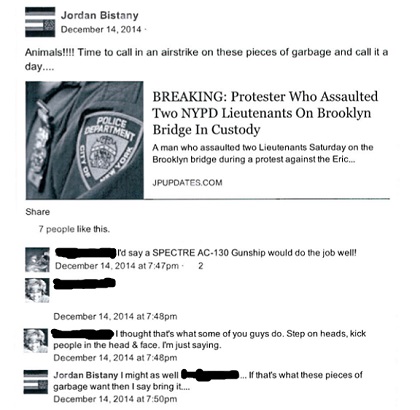 In another post, Bistany wrote that he wanted to "call in airstrikes on these pieces of garbage," in reference to Black Lives Matter protesters who fought with cops on the Brooklyn Bridge. (Courtesy of Steven Epstein)

In a remarkable turn of events, the trial closed with the judge, John Latella, directing the prosecutor on the case, Michael Brovner, to circulate Bistany's Facebook posts throughout the Queens District Attorney's Office and disclose them to any defense attorneys working cases involving Bistany. Legal Aid lawyers had tried to introduce the posts previously, but judges had blocked them, Epstein said.

"These were pretty substantive and pretty egregious posts for a police officer to make," Epstein said. "Based upon Judge Latella’s directive [prosecutors are] under a clear mandate to the court to" disclose the posts. Failing to do so "could potentially open up the door to a motion to vacate a conviction," he said.

The jury did convict Rodriguez of aggravated unlicensed driving, a misdemeanor punishable by a fine of up to $500 and as many as 180 days in jail. His sentencing is set for June.

Bistany's Facebook, now set to private, also seemed to violate a department social media policy that prohibits publicly identifying as an NYPD officer, making statements that reflect poorly on the department, and posting while on the job (In addition to the Black Lives Matter messages, Bistany posted photos of fresh car wrecks with glib captions such as "At least he was wearing his seatbelt.....")

The officer, a 14-year NYPD veteran who makes $132,800, has faced accusations of misconduct before. He was the subject of four Civilian Complaint Review Board complaints containing six allegations, as Epstein stated at trial. Of those, four allegations were deemed unsubstantiated, two were uncorroborated, one outcome was unavailable, and one was settled through mediation.

Bistany has also been named in three federal civil rights lawsuits. One stemmed from a 2011 incident where several officers beat and pepper-sprayed two men who were walking past a fight on 42nd Street, then arrested them on charges of resisting arrest, disorderly conduct, and obstructing governmental administration. The charges were conditionally dismissed, and the city settled the lawsuit for an undisclosed amount of taxpayer money. Another suit, by a transgender woman who said that police arrested her after workers at a Midtown McDonald's beat her for using the women's bathroom in 2006, was withdrawn without the city paying anything, according to court records.

The third is a class action lawsuit filed in 2014 by the Legal Aid Society alleging that officers including Bistany set up unregulated checkpoints on highway exit ramps, then questioned and searched people without cause, and lied in arrest reports about how the stops were made. In one stop, Bistany allegedly arrested a man who drove into an informal checkpoint even though he blew a 0 on a Breathalyzer. Bistany justified the stop by saying that he pulled the man over for having tinted windows and an air freshener blocking his mirror. The man said he had neither, and his charge, for refusing a drug test at the precinct, was dismissed and sealed. The practice of shadow checkpoints has continued despite five judges ruling that such stops are illegal, according to the suit.

That case is ongoing.

Bistany did not respond to a Facebook message seeking comment. The Queens District Attorney's Office and NYPD press office did not return emails by press time.