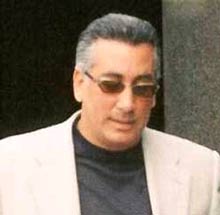 Vincent Basciano, the reputed boss of the Bonanno crime family also known as "Vinny Gorgeous," may be on trial for the 2001 murder of a rival, but that doesn't mean he can't be concerned with his appearance.

During an appearance in Brooklyn court yesterday, Basciano was upset because he was not, as Newsday puts it, "provided with a dress shirt to go with the suit he wears to his federal racketeering trial." Well, who wouldn't be upset?!

Basciano told Judge Nicholas Garaufis he was "uncomfortable" wearing only a t-shirt under his suit jacket and said, "I know what's appropriate to wear in court." Garaufis then turned from jurist to stylist, asking Basciano what size shirt he wears (seventeen neck) and then had an aide fetch a blue shirt and yellow tie. From Newsday:

"I'm not sure if it's color coordinated, Mr. Basciano, but actually green and blue go together these days," said Garaufis, refering to Basciano's suit jacket.

"I would do my shopping here," answered Basciano, "Thank you very much."

Hilarious stuff, really, when you forget about the alleged violence, etc. The jury was not present during the exchange.

#brooklyn
#court
#crime
#From Newsday
#headlines
#judge nicholas garaufis
#murder
#Shopping
Do you know the scoop? Comment below or Send us a Tip