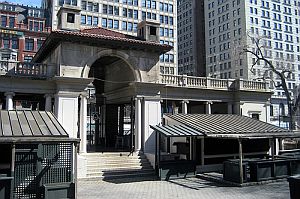 A state judge has issued a temporary restraining order to stop the city’s $21 million overhaul of the north end of Union Square Park, which would install a new restaurant in the historic Pavilion, redesign two playgrounds and repave asphalt where the Greenmarket had been operating. A coalition of community groups and parks advocates who brought the lawsuit say the city needs to get approval from the state legislature before privatizing part of the park, which has long been a flashpoint for protests and rallies.

A lawyer for the city calls it a necessary “rehabilitation,” of the 78-year-old Pavilion, which has previously served as kitchen space for a rather shabby outdoor restaurant. But parks advocate Geoffrey Croft says the new restaurant “would take away the opportunity to reclaim thousands of square feet of additional play space in a community with the lowest amount of playground space and highest concentration of restaurants in the city.”

Opponents also speculate that restaurateur Danny Meyer, owner of Union Square Cafe and Madison Square Park's Shake Shack, is heavily favored for the Pavilion restaurant contract – perhaps a too-cozy arrangement because Meyer is also co-chair of the Union Square Partnership’s Local Development Corporation, which is financing much of the project.

The Parks Department is also planning to cut down approximately 14 mature trees, so a protest rally is planned for Arbor Day in Union Square, this Friday at 6 p.m. On Monday the judge will decide whether to issue a preliminary injunction, which would stop work indefinitely as the lawsuit moves forward.

Photo of Pavilion by wallyg.