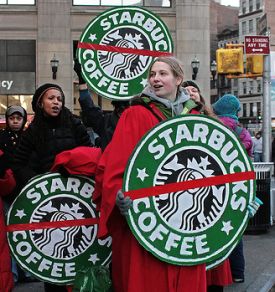 A National Labor Relations Board judge ruled yesterday that Starbucks engaged in unfair labor practices at several of its New York coffee shops, the Associated Press reports. The decision is the culmination of a lengthy trial which began in March 2006 when the Industrial Workers of the World filed charges against the company, accusing managers of interrogating employees and firing workers who supported the union.

Yesterday Judge Mindy E. Landow ruled that Starbucks illegally terminated three baristas and ordered that they be reinstated to their jobs and receive back wages. The 88-page ruling also found that managers at Starbucks broke labor laws by issuing negative job evaluations to union supporters, illegally prohibited them from talking about the union, and censored information about the union on bulletin boards, another no-no. Landow ordered Starbucks to end discriminatory treatment toward union-organizing employees at four of its Manhattan locations: 200 Madison Avenue at 36th Street, 145 Second Avenue at 9th Street, 15 Union Square East, and 116 East 57th Street.

A Starbucks spokeswoman tells the Times, "While we respect the N.L.R.B. process, we’re disappointed with the decision, and we intend to appeal it to the next stage in the process." But lawyers for the union are confident the ruling "will be upheld by the National Labor Relations Board in Washington, D.C. should Starbucks appeal...This decision conclusively establishes Starbucks’ animosity toward labor organizing. For the first time, a judge has confirmed the existence of a nationally coordinated antiunion operation at Starbucks." And the Starbucks Gossip blog is strangely silent thus far.

#iww
#labor
#lawsuit
#new york
#nyc
#starbucks
#union
Do you know the scoop? Comment below or Send us a Tip