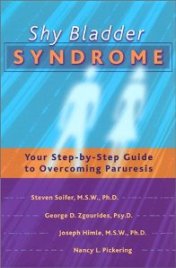 A judge flushed away fired sanitation worker's lawsuit that claimed the city unfairly dismissed him because of his shy bladder. Last year, Jerry Medard was required to give a urine sample for a mandatory drug test after being arrested for pot possession (charges that were later dropped). His first urine sample was too hot (Medard's lawyer suggests it could have been placed next to a "someone's coffee cup" or "someone's hot plate" - ew) and then later supervised attempts to produce a sample were unsuccessful, in spite of Medard drinking loads of water. The city fired Medard, who then sued for his job back.

Judge Emily Jane Goodman ruled against Medard, finding his firing "not in bad faith" and noted that other courts have rejected shy bladder claims, not to mention that Medard never previously mentioned he had this problem and was able to give the initial sample. Medard's lawyer Steven Kirschner said this experience was when his client realized he had a shy bladder: "People say, 'Ah, what an excuse' But the vast majority of people have never had to give a urine sample under supervision."

According to the Shy Bladder Institute, 7% are afflicted with paruresis. We wonder if Medard's lawyer produced this Dilbert cartoon (PDF) as evidence.