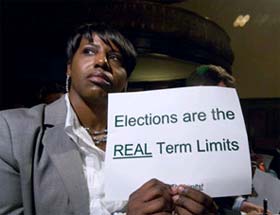 Though City Council Speaker Christine Quinn announced that the City Council would vote on whether to extend term limits from two terms to three for a number of elected positions--most notably for Mayor Bloomberg and his third term dreams. Council members Bill DeBlasio and Letitia James filed a petition with the State Supreme Court to stop the vote. Their argument is that it's in violation of the Conflict of Interests law, because extending term limits would apply to Council members, as well as the mayor, public advocate, comptroller, and borough president.

Last week, the Conflict of Interests Board said the vote could go through, but the board is made up of mayoral appointees. Quinn is not too worried about the petition, "I was yesterday and I am today very optimistic that the mayor's bill will pass tomorrow." A Daily News source (an unnamed Council member) agreed, "They have the votes at this point. I went through them myself today, one by one, and I think they have it. They wouldn't put it on the floor if they didn't have it."

Council member Vincent Ignizio predicted to the Post "the outcome would be close, with fewer than 30 of the 51 legislators voting in favor." Twenty-six votes are needed; right now, NY1's tally finds 18 in favor of extending limits, 23 against, and 10 undecided. If you want to contact your City Council member about his/her vote, you can find their info here. Gotham Gazette has more details on the legislation here and the News got some feedback from an astrologer about the vote.

Update: The vote will go on tomorrow--a judge has denied the petition to block the vote.

Photograph from the City Council