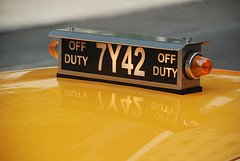 A federal U.S. district judge decided not to block the City of New York from requiring the installation of GPS and credit card equipment in taxis. The Taxi Workers Alliance went to the courts after a strike by its members earlier this month had a less than dramatic impact and failed to sway public and political opinions. Some drivers are opposed to the installation of the equipment because they say GPS tracking invades their privacy and that poorly designed credit card equipment and fare meters will cost them in lost revenues. The federal judge in the case ruled that the benefit to customers outweighed the privacy concerns of drivers.

Back in July, NYC Taxi and Limousine Commissioner Matthew Daus claimed that drivers using the new equipment were making 18% more in tips. Cab drivers are worried that the new equipment will encounter problems similar to GPS-equipped cabs in Philadelphia, where frequent system crashes and GPS dead zones meant that customers were undercharged. The Taxi Workers Alliance will proceed with its suit against the city; (the judge only refused to issue a temporary stay on the new equipment requirement.) The group's executive director said that another strike was a distinct possibility.

#city
#District
#fare
#Limousine Commissioner Matthew Daus
#new york
#News: NYC
#nyc
#NYC Taxi
#philadelphia
#strike
#taxis
#the city
#The Taxi
#The Taxi Workers Alliance
Do you know the scoop? Comment below or Send us a Tip
A new Gothamist is coming! We’ve moved comments over to our beta site. Click here to join the conversation and get a preview of our new website.