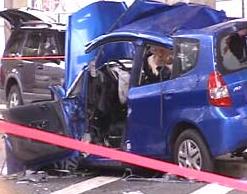 One teen is dead and two others suffered injuries after a Honda they were riding in crashed into a column for the A train's elevated tracks at Rockaway and Beach 101st yesterday morning. And what's more, the car was stolen the night before.

Once the car hit the column, it burst into flames. Residents who saw the crash brought pails and hoses to help put the fire out and even crowbars to pry open the car. They managed to pull out a 15-year-old in the backseat, whose legs were on fire, while emergency workers extracted the driver and front passenger.

Witnesses told WABC the car was going around 65MPH and one told the Post that the car "ran the light" and then "lost control and they jumped the curb." The 16-year-old driver is in stable condition with burns and 15-year-old passenger in the back of the car has a broken leg, but 17-year-old Dashawn Davis, who was sitting in the front passenger seat, died from his injuries.