A day after gunfire erupted at Brooklyn's J'Ouvert celebration, killing two and injuring two others, victims and their families are looking for answers.

Shortly before 4 a.m. Monday, 17-year-old Tyreke Borel was fatally shot in the chest near the intersection of Empire Boulevard and Flatbush Avenue, in almost the exact center of J'Ouvert's one-and-a-half mile parade route. 72-year-old Margaret Peters was struck in the hand and arm as she ran for cover.

According to the police, both Borel and Peters were rushed to Kings County Hospital. Peters was treated for gunshot wounds to her hand and arm and was released. Borel was pronounced dead.

“I’m very happy to be alive," Peters told the Daily News. I thought this year it would be much safer with the lights on every block and all the police." Additional security precautions for this year's J'Ouvert included 200 light towers, 42 new surveillance cameras and thousands of NYPD officers stationed along Flatbush Avenue, Empire Boulevard, and Nostrand Avenue. Mayor de Blasio, NYPD Commissioner Bratton, and several community leaders had assured the public that the six-hour party would be safe after last year's fatal shooting of Governor Cuomo aide Carey Gabay.

In the end, it wasn't enough. “[Y]ou can't stop bad from coming out even with lights on,” Peters said. The Trinidad native told the tabloid she's been living in Brooklyn for 40 years, and recalled falling down as she tried to run from Monday morning's gunfire.

"When I tried to get up my hand was bleeding. The middle of my hand had a lot of blood coming out,” she said. Peters's hand was reportedly punctured by a bullet that traveled through and struck her in the bicep.

In an interview with the Post, Peters said she would not be attending next year's J'Ouvert celebration.

“HAPPY TO BE ALIVE”: 72-year-old Brooklyn woman one of four shot at J’Ouvert celebration https://t.co/4z4MEskhan pic.twitter.com/BPSwF3dcnc

Tyreke Borel's mother, Alima St. Clair, had warned her son about going out during J'Ouvert. "He was just a lovely child who wanted to enjoy the Labor Day," St. Clair told the Daily News. "I told him to be safe. But he's 17. He didn't want to stay home."

The boy's stepfather, David Jones, told the Times that the boy had moved to Brooklyn from Tinidad nine years ago and wanted to be a mechanic.

Roughly 30 minutes after Borel and Peters were shot—and only a block away on Empire Boulevard—22-year-old Tiarah Poyau was shot in the face after a dispute, the Times reports. She was also rushed to Kings County Hospital but later died of her injuries. A neighbor described Poyau to the paper as kind and friendly. "She was a beautiful girl," Gwen Wilkinson said. "I knew her for years. She was always saying hello." 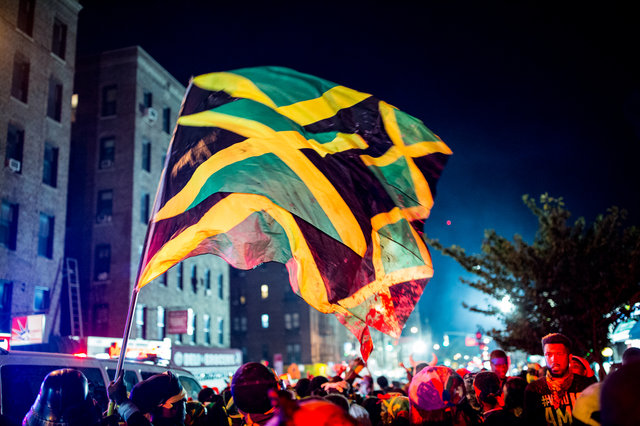 Photographer Cheney Orr was nearby when Poyau was shot, and described the moment to Gothamist in an email.

It was about 4 a.m. and roughly 20 minutes after the first shooting. When the first shooting occurred I was two blocks away and people scattered. Police barricades were stampeded. When the second shooting occurred I was on the corner of Franklin and Empire, half a block away. The gunshot was a light pop and sounded almost like a firecracker. A few people ran but initially people seemed unsure whether it was a gunshot or not, myself included. Then I saw police rushing to the scene. Only when I got a bit closer did I see Ms. Poyau on the ground.

Poyau's friends and family described her to The Post as an ambitious, career-driven student at St. John's who worked as a tax intern at PricewaterhouseCoopers and hoped to eventually become an accountant.

According to police, a 23-year-old woman was stabbed later Monday morning at Ocean Avenue and Eastern Parkway, and a man was shot in the leg at Clarkson and Rogers Avenues at roughly 7 a.m.

No arrests have been made, and it's unclear if the NYPD has identified any suspects in the shootings. NYPD Assistant Chief Patrick Conry told reporters that both Poyau and Borel appear to be innocent bystanders, not intended targets.

An estimated 250,000 people attended the J'Ouvert festival, and by 5 a.m. Monday it was almost impossible to perceive that the two deadly shootings had taken place, as trucks loaded down with stereos and throngs of dancers packed Empire Boulevard. J'Ouvert roughly translates from French to "daybreak," and is a traditional pre-carnival party held in many Caribbean nations. It has become a yearly fixture for Brooklyn's West Indian communities and draws revelers from other boroughs, cities, and states.

At a press conference Monday morning, de Blasio and Bratton expressed remorse and frustration at the fact that such extensive precautions still ended in violent deaths. "Our hearts are heavy today...Last night there was violence that is fundamentally unacceptable," de Blasio said. "We're fundamentally angry and focused on those who undermine the safety of the many."

"We always...plan for the worst and hope for the best," Bratton told reporters. "Unfortunately despite those high hopes and all the work that went into the event last night, we had unfortunate tragedy once again affect this event. That will not deter us."

At the press conference, de Blasio declined to say whether J'Ouvert would be banned completely in the future. "I’m not going to go into detail until we do a full review," the Mayor said.

Shortly before yesterday's daytime West Indian Carnival Parade, Governor Cuomo told the press that the J'Ouvert gun violence only underscores the "insanity of illegal guns in this country" and the need for national lawmakers to pass stricter gun regulations.

“They have to pass national gun control because no state can protect itself otherwise. I can’t stop guns from coming in from states down South,” Cuomo said.