By
Scott Heins
and
Jake Offenhartz

By
Scott Heins
and
Jake Offenhartz

On the Monday before Labor Day, Dwayne and Duran Griffith are sitting in the backyard of their Brownsville home, mixing water with blood red paint, and funneling the solution into hundreds of small plastic bottles. Beside them, a shed spills over with helmets, each fit with cattle, goat, or antelope horns, as well as feathered boas and glitter. Soon, a friend with a tub of motor oil will arrive, at which point the Griffiths can begin the process of transforming themselves and hundreds of others into the Jab Jab—French patois for a devil personified.

The preparations are for J'Ouvert, the exuberant parade that kicks off the Caribbean Carnival in Central Brooklyn. At daybreak on Monday, around 250,000 people will pour into Grand Army Plaza, blasting the neighborhood with talcum powder, motor oil, and the rumble of steelpan music. Many of the most visually striking revelers in the crowd will have gotten their materials from the Griffith brothers.

"Once I hear the drum talking to me, and the pigment and everything else, I can feel the spirit of the ancestor resonate in me," said Dwayne Griffith, 35. After passing out Jab Jab kits to hundreds of party-goers, the two typically perform their own ritual, dramatic spectacle that draws from the parade's origins of ex-slaves mocking and frightening their colonial masters.

But despite having participated in more J'Ouverts than they can count, the Grenada-born brothers are unsure what to expect this weekend. Last month, organizers and city officials announced that the event's start time would be moved from 4 a.m. to 6 a.m., with the aim of preventing the deadly violence that's plagued the predawn tradition in recent years. The NYPD will also set up dozens of checkpoints along the parade route, where attendees will be frisked with metal detecting wands and reportedly stripped of booze and large bags. 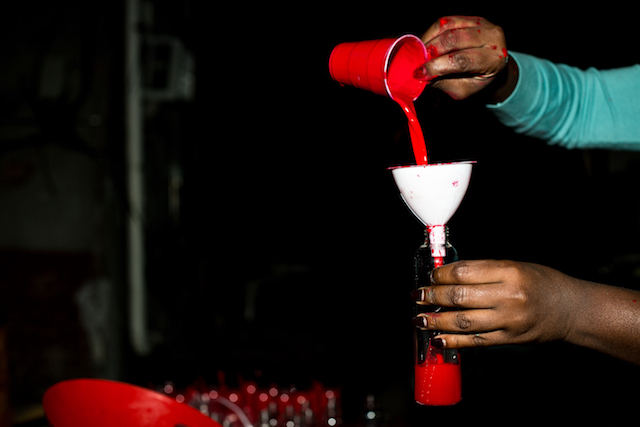 Sharmany St. Martin helps her husband Duran with Jab Jab prep by pouring mixed paint into a personal-sized bottle in Brownsville. Hundreds of bottles will be sold to J'Ouvert attendees next Monday morning. (Scott Heins/Gothamist) 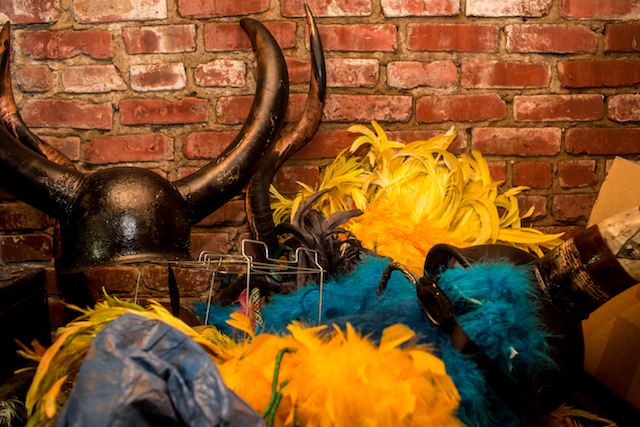 Stacks of Jab Jab gear including horned helmets and feather boas fill Duran's backyard shed. Much of it will be used again during this year's J'Ouvert. (Scott Heins/Gothamist)

"We've taken a lot of L's [losses] in the past few years, and we're trying to do the best with what we've got," said Duran, 31. "But it can feel like they're trying to pick apart our culture."

Dwayne Griffith says he's in favor of the metal detectors, noting that the pattern of Labor Day violence has left the city no other choice. "No one should bring guns anywhere, so as long as they don't get too vigorous with it, I think it'll be a fine J'Ouvert."

As the Griffith brothers prepare the Jab Jab essentials, members of the steel-pan band Despers USA are practicing in an otherwise vacant lot on Classon Avenue and Pacific Street in central Crown Heights. Seven nights a week throughout the summer, fifty or so pannists can be found here tapping away on pitched oil drums, as band leader Odie Franklin drills them on their intricate ten minute composition.

"Make it nice," he shouts, unafraid to call out slackers. "Don't anticipate on the bass drum. And keep it grimey." There's no score for the arrangement, so Franklin teaches each member their part individually, singing it back to them when they struggle with the notes.

On Saturday night, Despers USA will compete with a dozen other bands in the annual steelpan championship outside the Brooklyn Museum. Known as Panorama, band members say the contest is "like a war." They hold on to resentment about last year's loss, and vow to get even with rival D'Radoes (both are descendents of Trinidad's famed Desperadoes Steel Orchestra). But the day after a winner is selected, the rival bands gather at Grand Army Plaza for J'Ouvert, co-producing a thumping island soundtrack to the massive blowout. 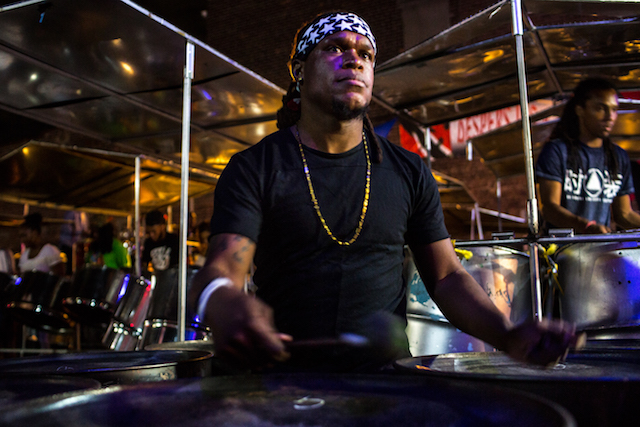 Kernel Simon practices with Despers USA at their panyard in Crown Heights, Brooklyn. Simon, a Flatbush resident, plays the low-pitched "six bass" drums and has been in steel bands since 1994. (Scott Heins/Gothamist) 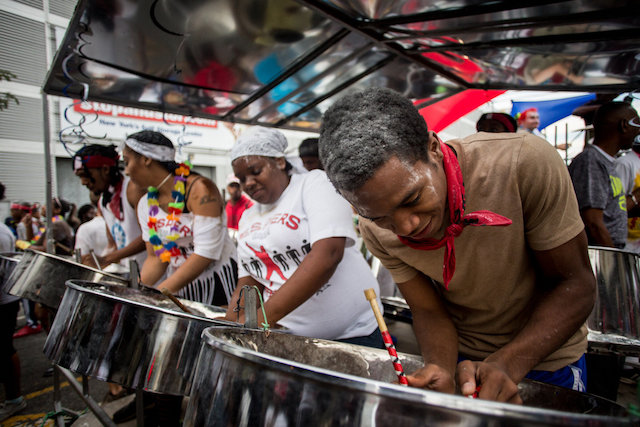 "When the pan families meet at J'Ouvert, it's all love and friendly," says Kianna Carrington, a 19-year-old Despers member from Flatbush. "It's our way of blowing off steam, because pan becomes our life for so long."

Carrington, along with a fellow Despers member Sparkle Demming, both feel that J'Ouvert has been misunderstood by politicians and the media.

"It's a rebellion of the prettiness on the parkway," says Demming, referring to the more family friendly West Indian Day parade. "But it's also a prideful thing for Trinis. The people who actually cause these problems aren't of the same culture, and we feel like we're being punished for it."

Mayor Bill de Blasio, who faced harsh criticism for not canceling the parade following last year's violence, has expressed similar sentiments about the nature of J'Ouvert. But the mayor has also supported an end to the pre-dawn portion of the festivities, with the commissioner of his Community Affairs Unit noting that "the biggest thing for us is sunlight...light is a big deterrent."

"I just feel like J'Ouvert in the daytime is a totally different thing," responded Carrington. "I mean, that's school time." 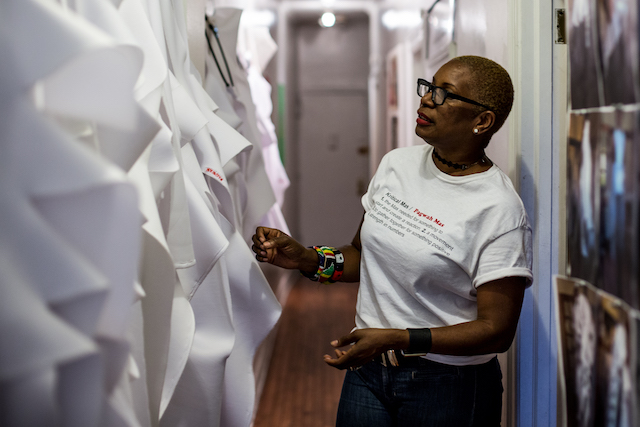 Donna Dove checks her finished patterns of Pagwah mas J'Oouvert costumes in the hallway of her Harlem apartment. (Scott Heins/Gothamist)

About 12 miles north, in South Harlem, 57-year-old costume designer Donna Dove has reached the same conclusion. "The whole excitement is coming out in the dark and going into the light," she says, passing yardsticks and sewing patterns to her colleague, Wire John. "It symbolizes refreshment, brightness, and energy. So [the new schedule] kind of takes away the meaning, especially for people who truly know what J'Ouvert's all about."

For the past three weeks, Dove's apartment has served as a kind of garment factory, where she and John have worked to fill orders for members of Pagwah Mas, a Trinidad-American collective based in Crown Heights, Brooklyn. By this weekend, they'll have finished 250 custom outfits, all of them destined for J'Ouvert.

Founded in 2008 by Dove's brother, Richard Pacific, Pagwah Mas works as a kind of outfitter, offering readymade costumes, custom bodypainting, and community to J'Ouvert attendees wanting to celebrate in style (and willing to pay a price). Pagwah's aesthetic blends modern street fashion with centuries of personal history. "It all ties back to Africa," Dove says. "Our background comes from Trinidad slaves taking clothes from their masters, but we're fashionistas as well."

This year, Pagwah has made its theme "Kritical Mas," a commentary on global war, racial tensions, and, at least partially, the new J'Ouvert restrictions. For Dove, it's an upsetting break with tradition.

"They're chipping away—chipping away trying to get to us in so many ways," Dove says. "But we'll start at six o'clock and still enjoy ourselves."

Dove's brother, meanwhile, thinks the added security measures, particularly the addition of 10 percent more uniformed police, are a net gain. "It's welcome, regardless," he told Gothamist. "Even if nothing is happening in the confines of J'Ouvert itself...It's a deterrent to keep out the fringe element." 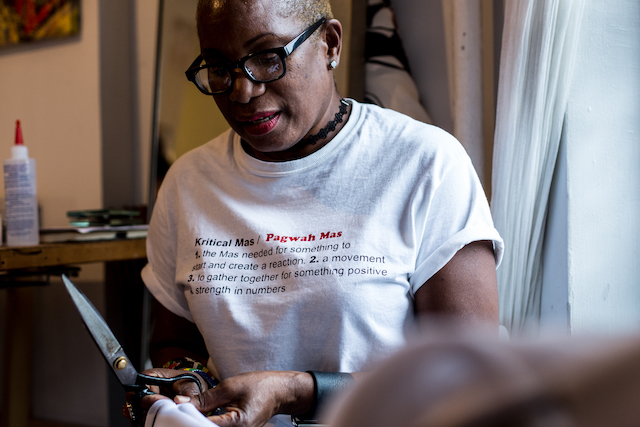 Pagwah will adapt to the new delayed start time, welcoming its costumed players into the Crown Heights mas yard beginning at midnight Monday. The plan will allow its members to begin celebrating J'Ouvert well before 6 a.m. and to prepare for the expected lines at the NYPD checkpoints. At daybreak on Monday, their crew of 500 decked-out players will parade down Flatbush and Empire Boulevard, flanked by steel pan bands, the Jab Jab, and thousands of other merrymakers.

For Dove and thousands of others West Indians living in New York and across the country, Brooklyn's J'Ouvert is a chance to feel fully at home.

"It's much needed for the culture and people that live outside of Trinidad. It takes us back there for a few hours—makes us feel like we're there," she said.

"Within all the madness, there's us in the middle, trying to keep this thing going."