J'ouvert Leader: Street Party Is Safe, The Violence "Is On The Peripheries"

In a private two-hour emergency meeting at Borough Hall, Brooklyn Borough President Eric Adams met yesterday with local politicians, J'ouvert and West Indian Day parade organizers, and members of the NYPD to discuss the possibility of a J'ouvert task force—a group that would propose "modifications" to the early morning Labor Day carnival procession, as well as other large-scale parades and holidays celebrated in the borough.

"For those that are calling for the end of J'ouvert, we are saying no,” Adams told reporters.

"This is not a J'ouvert issue," Adams told us this afternoon. "We are looking at every parade that takes place in the borough, where upon the conclusion there is a spike in crime." For example, he pointed out, there were 14 shootings over Fourth of July weekend this year.

"We tend to look at the Labor Day weekend as one entity, when in fact it is not," Adams added, stressing that even J'ouvert night is multi-faceted. "There's the parade, the bars and restaurants that are open in the area and have events but have nothing to do with the parade, the popups and cookout parties going on all night, and, on Utica Avenue and Church Avenue, 250,000 people just partying," he said. "Let's hold up. We're hoping to correct a condition, and the only way to do that was to correctly define it."

Adams ran down a laundry list of preliminary proposals that came up in yesterday's meeting: shifting the hours of the J'ouvert parade closer to dawn (this year, the procession started around 4:00 a.m.); launching an education effort to teach "young people" in the community about J'ouvert's cultural significance; getting retired police organizations in the Caribbean community involved as a sort of unofficial community-policing force; "reaching out" to the party promoters who host events along the parade route.

While J'ouvert organizers have reportedly been reluctant to comment publicly on J'ouvert 2015—which continues to make headlines in the wake of the shooting of Carey Gabay, an aide to Gov. Cuomo who is still in a coma—one J'ouvert organizer, Kwasi Wahtuse, 43, described an annual event that is largely misrepresented in the press.

"I think the media has made no distinction between the actual J'ouvert celebration, and the violence that occurs before, during, and after it," he said. "The actual parade itself is always secure, with a strong police presence. The stuff that happens on the peripheries is what they talk about. The media is making no move to describe violence as a perennial problem." 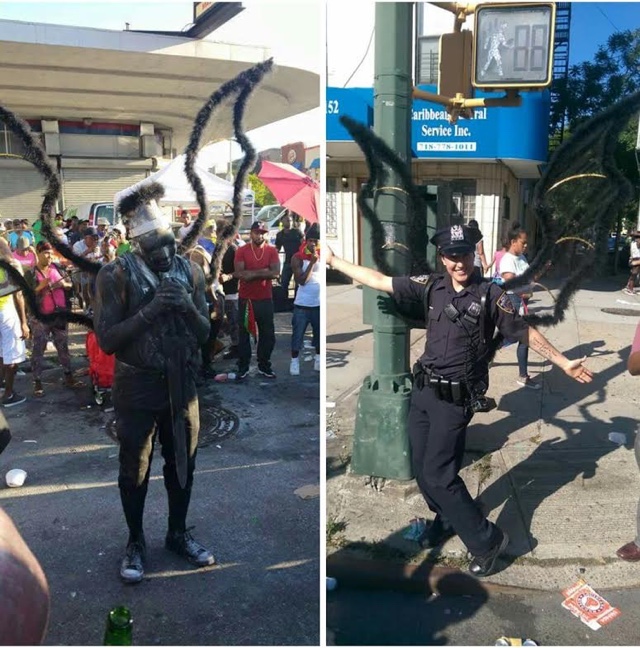 Wahtuse in his black angel costume (l). An NYPD officer borrows his wings (r) (via Wahtuse)

From his spot in the procession, Wahtuse said he didn't witness any of these incidents, or the NYPD's crime scene response. "I have to go by the reports of the violence," he said. "A lot of us believe in our community that that violence is between persons who have no interest in the J'ouvert celebration of the parade."

Wahtuse, who leads the New Jersey-based J'ouvert group Dirty Dreamz, has been participating in Brooklyn's J'ouvert parade since 1990. He said that he has attended multiple pre-J'ouvert planning sessions at the 67th Precinct in recent years, including one last year with two officers and two "community liaisons." He described these meetings as "logistics meetings," to discuss crowd control, police escorts, noise control at surrounding parties, and the issue of rogue, unregistered bands occasionally joining the parade.

NYPD spokesman Stephen Davis yesterday told the Post that J'ouvert had "never" applied for a permit to operate.

"J'ouvert is a contraction of the French jour ouvert, or dawn/day break," Wahtuse said. "When the emancipation [of slavery] came, Caribbean people would have these parades and processions in the street, dressed as characters of folklore and as the devil character, often to represent the white master."

This year, Dirty Dreamz's theme was Darkness In the Light. Wahtuse dressed as a black angel, and another band member dressed as a white devil.

"Traditionally, evil and bad things have been portrayed as darkness, while everything good, uplifting or right has been in the light," he said. "In our current society, the so-called bastions of light are the police department, the church, the government. We decided to flip it a bit."

Yesterday, Officer Davis issued a statement about NYPD plans for J'ouvert 2016. "Going forward, we are going to make a point of working with the local politicians and local organizers in the area to make sure...that the event is appropriately policed and that the organizers take the proper measures in running this event," he said.

#jouvert
#Task Force
#violence
#west indian day parade
Do you know the scoop? Comment below or Send us a Tip