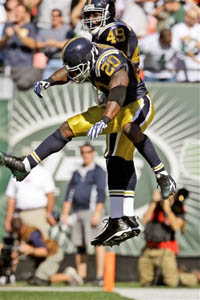 Thomas Jones scored all of two touchdowns -- one rushing and one receiving -- last season. In Sunday's 26-14 win over the Bengals, he found the end zone thrice. The win wasn't as convincing as some may have hoped, especially since Cincinnati was without Carson Palmer, but as Brett Favre said, “I don’t believe in ugly wins. That one felt as good as any win I’ve been a part of in recent memory.”

That last part could be a bit of hyperbole. The Bengals are now 0-6. Favre's fumble led to the Bengals' first touchdown, and it wasn't until Jones' third touchdown came with 2:22 that the Jets iced this game. To be fair, the Bengals hung tough with the Cowboys and the Giants, two teams many considered to be among the league's elite. Favre, who threw two picks to go along with his lost fumble, managed only 189 yards and one touchdown. The Jets travel to Oakland next week. The Raiders may be worse than Cincinnati.

#brett favre
#football
#jets
#sports
#Thomas Jones
Do you know the scoop? Comment below or Send us a Tip