Jon Stewart: China Does "Occupy" & "Wall Street" Better Than Us

Protesters in Hong Kong have cleared out after tens of thousands flooded the central business district last week, and The Daily Show's Jon Stewart observes that it's gone from "massive anti-government rally to listless teen hang." But he analyzed the overall tenor of the Umbrella Revolution and found the protests rather impressive: "They're beating us at both the 'occupy' and the 'Wall Street' — it's not fair."

He did point out that the daughter of Hong Kong's leader, Chief Executive CY Leung, is even more insane than our American socialites—22-year-old Chai Yan Leung told commenters on her Facebook, "This is actually a beautiful necklace bought at Lane Crawford (yes - funded by all you HK taxpayers!! So are all my beautiful shoes and dresses and clutches!! Thank you so much!!!!)"

Then she added, "Actually, maybe I shouldn't say "all of you" - since most of you here are probably unemployed hence have all this time obsessed with bombarding me with messages... Actually considering the standard of English I've skimmed through at times I doubt you'd even understand what the term 'social media platform' means... it's okay - your mother still loves you."

Making matters worse for Stewart, the "Umbrella Revolution" was going to be the name of his next album: 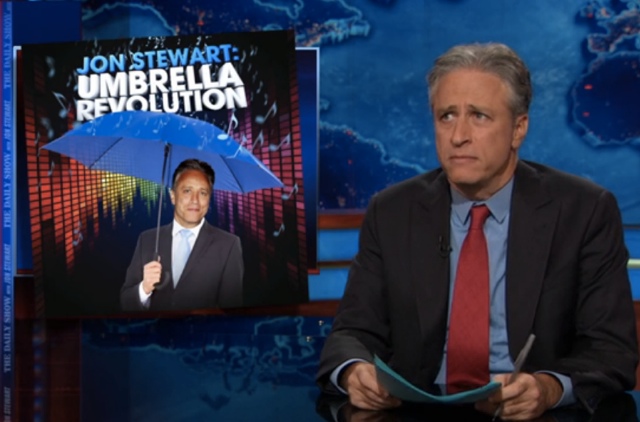 #daily show
#Hong Kong
#occupy wall street
#Umbrella Revolution
Do you know the scoop? Comment below or Send us a Tip