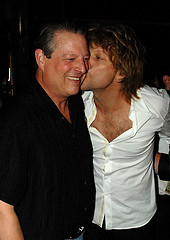 The NY Times reports on Mr. New Jersey's ties with the political elite. With it being common practice for high-ranking politicians to attend his concerts, it's seems it's a two way street, with Bon Jovi also showing his support at their functions.

He calls her “Mrs. C.” And she calls on him to add a little celebrity gloss to her presidential campaign.

Jon Bon Jovi and Hillary Rodham Clinton have been friends for more than a decade, uniting for state dinners at the White House and campaign fund-raisers in the Hamptons.

If it seems strange that a rocker who sings paeans of working-class New Jersey is so friendly with a senator and former first lady who chose a Celine Dion song for the theme of her presidential campaign, consider a few items on Mr. Bon Jovi’s social calendar in the last few months.

Hampton's dinners with Clinton aren't the only political plans he's had, he recently caught up with Al Gore in London and has been invited personally to see Barack Obama speak in Manhattan. All of these things and more have earned him the unofficial title these as "the Garden State’s elder statesman." Though he leans to the left, both Republicans and Democrats attach themselves to him -- even former governor Christie Whitman, who took his advice on the building of a Camden sports arena, had this to say about him:

“He basically says, ‘Hey, here’s where I’m from, like it or not,’ ” said Ms. Whitman, a Republican who later became administrator of the Environmental Protection Agency under President Bush. “And that’s refreshing for the state of New Jersey because we don’t have a lot of that.”

The Bono de Jerz leaves his beliefs at home for the most part, not speaking about the current administration or the war in Iraq. He focuses more on at-home problems like poverty, so much so that many speculated he would be running for governor himself (while Bon Jovi lives in Manhattan now, he keeps an estate in Middletown, NJ). It seems he's content just being a voter, however, and when asked who he'd endorse in 2008 he said he hadn't decided, but that he “My deepest hope was that he [Al Gore] was going to put his hat back in the ring. I’ve been waiting for that for eight years.”