Spiderman, the Joker and other costumed characters gathered in City Hall on Wednesday to protest proposed legislation that would relegate their business to designated zones within the Times Square pedestrian plaza from 42nd to 47th streets.

The legislation, up for vote April 7th, would empower the Department of Transportation to exact control over the city's 69 pedestrian plazas, regulating them much the same way that the Parks Department regulates city parks. Co-written by Midtown Councilmembers Dan Garodnick and Corey Johnson, it calls on the DOT to establish NYPD-enforced "plaza-specific rules" to regulate the "use of, and activities within, an individual pedestrian plaza."

"I know the media is buying that we are going after Elmo and Batman," said Councilmember Ydanis Rodriguez in his opening statements. "But we will not be putting anyone out of business."

The proposed legislation has considerable backing from the Times Square Alliance, a business-interest group that raised concerns about "aggressive" desnudas and costumed characters over the summer, coinciding with a flood of tabloid coverage. "What we've always said is Times Square should be unusual. Quirky is fine, but creepy is not," said Alliance President Tim Tompkins earlier this week.

Costumed characters and ticket sellers countered on Wednesday that the legislation was drafted without their input, impedes their right to freedom of speech, and could negatively impact their business.

Abdel Amine Elkhezzani, 37, has worked as Spiderman in Times Square for 10 years. He was arrested on Saturday after he allegedly got in a physical altercation with a customer over a tip, although he's disputing the allegations. "It's a lie for the city to say they just want a little order," he told us. "Do you want to see 10 Elmo's in a box? Do you want to see three Spidermans and a Hulk in a box? You want to limit... where I go, where I stand? That's not right. This is a public space."

"I came [to the Council] with a friendly clown look, and they wouldn't let me in [to the chamber] with the makeup," said Keith Albahae, 47, who testified in his Joker costume. "Let's be clear what the real problem is—the real problem is about looking different." He went on to accuse the Council of a "phony type of liberalism" and New York of becoming "the most fascist, prudish city alive."

"Why so serious?" the Joker asks @NYCCouncil in testimony. "This is becoming the most fascist city alive!" pic.twitter.com/zu3pFgznrf

DOT Commissioner Polly Trottenberg on Wednesday revealed a map of what Times Square might look like if the DOT is granted regulatory authority over it.

Stressing that "we anticipate some trial and error," Trottenberg pointed to designated walking areas, or "pedestrian flow zones" marked off by white reflective tape. These zones would mimic the sidewalks that existed in Times Square before the plaza was built, and would leave a 112,000 square-foot area, roughly the size of two football fields, for the placement of designated "activity zones"—areas where costumed characters, desnudas and ticket sellers would be required to work. The proposal lays out eight activity zones, each roughly the size of a city bus.

According to the DOT, Times Square accommodates, at its peak, about 300 costumed characters, desnudas and ticket sellers. The department believes that the designated areas will be large enough to comfortably fit 400 performers and sellers, in addition to the tourists who wish to interact with them.

"These are not tiny little areas that people cannot fit in," said Councilmember Garodnick. "In no way is anyone trying to tamp down free speech, and nobody's saying that people can't be in the plazas at all. It's just that we're trying to get a little bit of order."

While Trottenberg praised the Times Square Alliance, Garodnick, and other local councilmembers for their involvement in drafting the proposed legislation—her department's proposal is similar in layout to the Alliance's own Times Square Commons proposal presented last fall—neither she nor NYPD Captain Robert O'Hare of the newly-established Times Square unit could confirm that they had reached out to the ticket sellers or costumed characters directly for input.

"We learned today that this process has been going on for a year," testified James Muessig, treasurer for Transportation Workers Union (TWU) Local 225, which represents Times Square ticket sellers. "Garodnick was kind enough to meet with us 45 hours ago."

Ticket sellers work on commission. "Limiting my movements is going to affect my business because I have to move to get customers," said Sumaile Asmaed, 36, a ticket seller in Times Square for 10 years. "I'm not on salary, so if you limit my ability to sell, you're limiting my income." 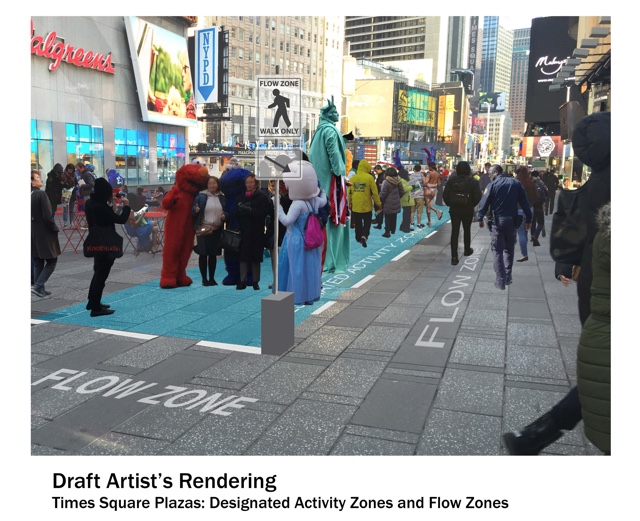 As for enforcement of the zones, Captain O'Hare said that his officers would start by "educating" ticket sellers and costumed characters. "We're not looking to criminalize this behavior," O'Hare said. "We're not going to hold a tape measure if you're going six inches over the line."

However, when Garodnick pressed for an explanation of the recourse if a worker repeatedly refuses to comply—"What if someone says 'I'm not doing that?' What's the ultimate punishment?"—O'Hare confirmed that this bill "allows us to take civil and criminal action."

Civil rights attorney Gideon Orion Oliver questioned the amount of authority the legislation would mete out to the DOT and, by extension, the NYPD. "After this passes, the DOT will engage in its own rule-making process for individual plazas, and all of that will happen without any further input or oversight from the Council," he added. "It's a very blank check to be writing to the DOT."

If the legislation passes on April 7th, the DOT will present a finalized draft of the proposed zones and enter a 30 day public comment period. Commissioner Trottenberg said that the zones could be established as soon as late May or early June.

#activity zones
#dot
#joker
#nypd
#pedestrian plazas
#spiderman
#original
Do you know the scoop? Comment below or Send us a Tip