Johnny Podres, Dodger Who Wouldn't Wait Until Next Year 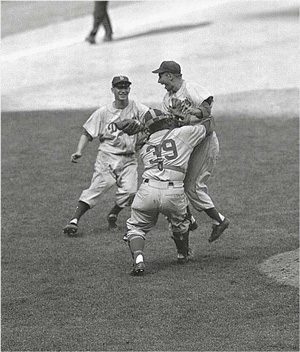 Johnny Podres died last night in a hospital in upstate New York at the age of 75. He'd been suffering from serious medical problems for some time. In 1955, Podres ensured himself a place in Brooklyn and baseball history as a young left-hander who pitched the Dodgers to their only World Series Championship while in Brooklyn, and he did it against the hated Yankees.

Ask someone real quick, "Who was the World Series MVP in 1955, when the Dodgers finally beat the Yankees after defeats in '41, '47, '49, '52, and 1953?" There are a number of plausible answers: Sandy Koufax, Gil Hodges, Duke Snider, Pee Wee Reese, Roy Campanella, Jackie Robinson. But the MVP was Johnny Podres, who pitched a full game shutout in Game 7 of the Series. The New York Times describes Podres' performance:

Podres had been effective with his changeup early in the game. As the autumn shadows began to approach home plate, making it tougher for batters to see the pitches, he turned to his fastball. He stopped the Yankees the rest of the way, completing an eight-hitter by retiring them in order in the ninth inning. When Elston Howard grounded to Reese for the final out, Podres was mobbed, and Brooklyn erupted in ecstasy.

“There was a hell of a party that night at the Hotel Bossert in Brooklyn,” Podres told Donald Honig in “The October Heroes.” As Podres recalled it: “Boy, the champagne! There was one guy there who kept telling me he’d been waiting for this since 1916.”

In Game 7, the Yankees got 8 hits against Podres, who walked two batters and struck out four. Five days earlier in Game 3, Podres also pitched a full game win, with seven hits, two earned runs, two walks, and six strikeouts. In the Daily News obituary of Podres, it's noted that he was a back-of-the-rotation starter for the team with a 9-10 record going in to the Series. One reason he got two starts against the Yankees was that he seemed to be immune to pressure on the mound, and in turn gave his teammates a boost of confidence on the field. And there must have been a lot of pressure in the Bronx and Brooklyn in the autumn of 1955.

Podres followed the Dodgers to Los Angeles two years later in 1957, and played with the team through 1965. He was traded to the Detroit Tigers in 1966 and ended his career with the Padres. In 15 seasons, Podres compiled a 148-116 career record. In a sad coincidence, Tommy Byrne, the Yankee left-hander who started against Podres that Tuesday afternoon 52 years ago, died last month at the age of 87.

At the Baseball Hall of Fame in Cooperstown, there's a sculpture of Johnny Podres delivering a pitch off the mound to Roy Campanella.