John Rocker, you may recall, is the former Atlanta Braves pitcher who famously said in 1999 that riding on the 7 train to Shea Stadium was "depressing" because it's "like you're [riding through] Beirut next to some kid with purple hair next to some queer with AIDS right next to some dude who just got out of jail for the fourth time right next to some 20-year-old mom with four kids." Now he's doing a Reddit AMA and guess what—he's still an asshole!

In an exchange with a Redditor about those infamous remarks, Rocker wrote, "It takes balls to pick a fight with an entire city because you see how many truly disgusting people there are and have virtually no idea what dirt bags they are. I saw it as an opportunity to let them know. I assume you are one of them. Now get a job you fucking loser and stop playing on the computer in the middle of a Tuesday afternoon. When you retire at 38 then you can play." 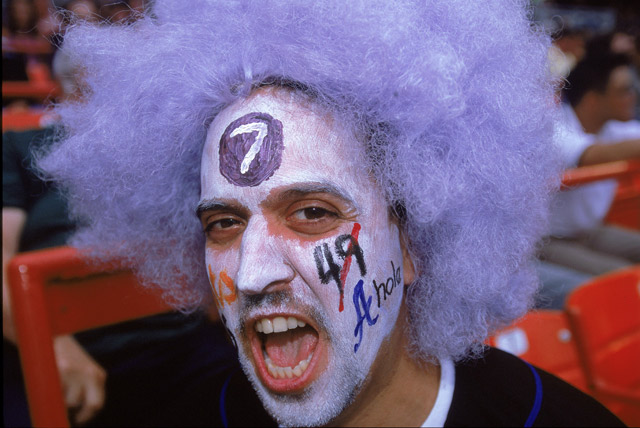 A John Rocker hater back in 2000 (Getty Images)

For reference, here's an excerpt from that 1999 Sports Illustrated interview:

On ever playing for a New York team: "I would retire first. It's the most hectic, nerve-racking city. Imagine having to take the [Number] 7 train to the ballpark, looking like you're [riding through] Beirut next to some kid with purple hair next to some queer with AIDS right next to some dude who just got out of jail for the fourth time right next to some 20-year-old mom with four kids. It's depressing."

On New York City itself: "The biggest thing I don't like about New York are the foreigners. I'm not a very big fan of foreigners. You can walk an entire block in Times Square and not hear anybody speaking English. Asians and Koreans and Vietnamese and Indians and Russians and Spanish people and everything up there. How the hell did they get in this country?"

On Mets fans: "Nowhere else in the country do people spit at you, throw bottles at you, throw quarters at you, throw batteries at you and say, 'Hey, I did your mother last night -- she's a whore.' I talked about what degenerates they were, and they proved me right. Just by saying something, I could make them mad enough to go home and slap their moms."

FWIW, in the AMA, Rocker claims, "I rode the 7 train, about 40x before making those comments, so my comments weren't assumptions, they were what I saw."