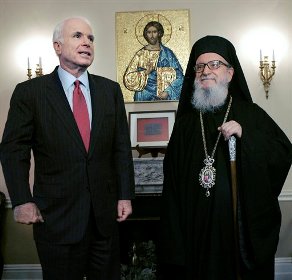 Yesterday, Republican presidential contender John McCain made a number of appearances in Manhattan to boost his campaign and rake in some donations. The tickets to the fund-raisers costs $28,500 a pop, so he made at least $2 million.

During the day, Cindy McCain visited a Harlem charter school and told NY1, "I do not ever envision myself as being involved in the 'McCain administration,' as it's been put, at all. But my husband and I do talk, and I certainly want to be a party to listening to what his ideas are too." She also managed to do a little window shopping at the Oscar de la Renta showroom yesterday, much to the dismay of security agents in suits waiting outside in the record-breaking heat.

The Senator took time to chat with the NY Post about how he believes he can lead the country and praise both Mayor Bloomberg ("I appreciate Mayor Bloomberg enormously and the great job he's done as mayor") and former Mayor Rudy Giuliani ("He's a great American. He united America"). Giuliani appeared at one fund-raiser, and he told the audience of power fund-raisers (those who raised over $100,000), "We need John McCain more than he needs us."

But NY voters seem to want Democratic challenger Barack Obama more: A Quinnipiac poll shows that Obama leads McCain 50% to 36% in NY State--and Obama draws 42% of white voters, compared to McCain's 43%. This comes on the heels of the two candidates' pointed attacks about each other's economic plans--McCain accuses Obama of raising taxes for everyone while Obama says McCain's plans will basically be a third Bush term.

Photograph of McCain with His Eminence Archbishop Demetrios, Primate of the Greek Orthodox Archdiocese of America in NYC yesterday by LM Otero/AP