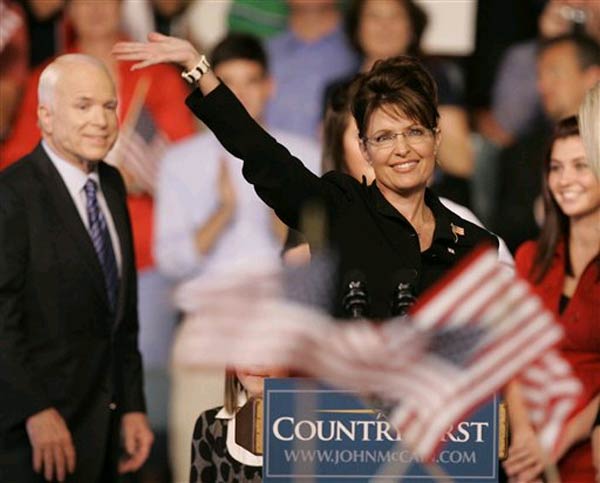 Photograph of McCain and Palin by Kiichiro Sato/AP

Republican presidential John McCain surprised most everyone by selecting Sarah Palin, the governor of Alaska, as his running mate. He said to the 44-year-old mother of five who joined him at an event in Dayton, Ohio, "I’m very happy today to spend my birthday with you, and to make a historic announcement in Dayton.” Palin is the first female vice presidential candidate in the Republican party.

McCain explained, "I’ve looked for the best to help me shake up Washington...She is exactly who this country needs to help us fight the same old Washington politics of me first and country second." Palin is seen as a reformer--she even dismissed talk of being a VP choice earlier by saying, "As for that VP talk all the time, I’ll tell you, I still can’t answer that question until somebody answers for me what is it exactly that the VP does every day? I’m used to being very productive and working real hard in an administration."

Not is it hoped that Palin will appeal to female swing voters, her selection gives something for social conservatives to get behind. Former head of the Christian Coalition Ralph Reed told the Times,"This is a home run. She is a reformer governor who is solidly pro-life and a person of deep Christian faith. And she is really one of the bright shining new stars in the Republican firmament.” She appeared with her husband and four of her children (her eldest son signed up for the Army on September 11 last year and is being deploying to Iraq next month) and said,"I know that it will demand the best I have to give, and I promise nothing less." She also said, "It was rightly noted ... that Hillary left 18 million cracks in the highest hardest class ceiling in America. But it turns out that the women of America aren't finished yet!" Video after the jump.

McCain's announcement was designed to take some of the punch out of Barack Obama's acceptance speech last night. The Obama campaign issued this statement: “Today, John McCain put the former mayor of a town of 9,000 with zero foreign policy experience a heartbeat away from the presidency. Governor Palin shares John McCain’s commitment to overturning Roe v. Wade, the agenda of Big Oil and continuing George Bush’s failed economic policies — that’s not the change we need, it’s just more of the same.”

One interesting detail about Palin is that she was the runner-up in the 1984 Miss Alaska pageant. In this video interview with Newsweek, Palin explained she did the pageant circuit for scholarship money, which did pay for college. The Newsweek video also has Palin's thoughts on Hillary Clinton's claims of sexism on the campaign trail (Palin says as a female politician, "you have to plow through it").

#barack obama
#election 2008
#gop
#john mccain
#sarah palin
Do you know the scoop? Comment below or Send us a Tip