John Esposito, who was serving a 15 years-to-life sentence for his 1993 kidnapping of 10-year-old Katie Beers, was found dead in his cell at Sing Sing yesterday. Prison officials say he had appeared before the parole board for a hearing earlier in the day.

The death of Esposito, 64, is being investigated, but it doesn't look suspicious. Esposito had been denied parole four times since entering the prison 20 years ago.

Esposito had kidnapped Katie Beers and kept her chained in a coffin-like box in an underground bunker at his Bay Shore home for 17 days.

Esposito had gone to the police, telling them she went missing after he took her to a video arcade on December 28, 1992 (two days before her 10th birthday), but police were suspicious and Esposito eventually turned himself in.

From a 1993 NY Times article about the discovery of Beers:

The girl, Katie Beers, was found by detectives in a locked room, closed off by a 200-pound concrete trap door that had to be lifted with a block and tackle. The room, 6 feet by 7 feet and below a converted two-car garage, contained closed-circuit television equipment...

Entry appeared to have been made deliberately difficult. Shelves that held a stereo system and a bar had to be removed by taking out bolts; the carpet had to be rolled back, and the slab of concrete had to be hoisted. That exposed a ladder leading to a tunnel that ended at the locked door to Katie's little room.

[A Suffolk County DA's office spokesman] said that the room was soundproof and that no matter how loud Katie might have yelled for help, no one could have heard her.

Now, Beers, who wrote a book about her ordeal, says, "Being abducted was probably one of the best things that could have happened to me in my life," because before that, she had been sexually and emotionally abused by adults in her life. After the kidnapping, she joined a loving foster family.

In a statement about Esposito's death, Beers said, "I’m saddened at the loss of a life, but at the same time I’m happy that John Esposito will never be granted parole or have the opportunity to hurt anyone ever again." 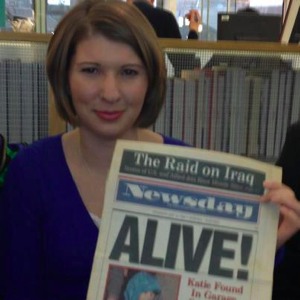 Katie Beers, with a newspaper about her rescue (Facebook)

It's time to close another chapter in my life. I received a phone call today shortly after 5pm from the NYS Parole board. Today was the day that John Esposito had his parole hearing. The NYS Parole board let me know that at about 3:30pm today, after his hearing, John was found unresponsive in his jail cell & pronounced dead.

I have to say that I'm not saddened by John's passing - I'm saddened for his remaining family - they lost John a long time ago, but now they've lost him forever.
Within 24 hours, we have lost 2 monsters - Ariel Castro, who committed suicide; and John Esposito, who has died of unknown reasons.

In a letter included in Beers' book, a letter from an imprisoned Esposito to Beers' co-author, WCBS 2 reporter Carolyn Gussoff, read, "I think Katie knows I will always wish her well. I’m sorry for what I’ve done. I’m sorry I even thought it up. It was a mistake.”