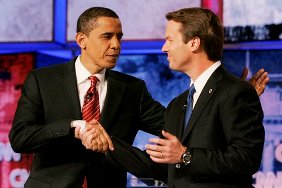 Former senator and presidential candidate John Edwards will endorse Senator Barack Obama at an event in Michigan today. Edwards, who dropped out of the Democratic hunt for the nomination back in January, had been expected to support Obama, especially after statements referring to him as the likely nominee.

Edwards and Obama appeared to team up to attack Clinton during a debate in New Hampshire earlier this year. When Clinton was claiming Obama was inconsistent with his views, Edwards said:

Any time you speak out powerfully for change, the forces of status quo attack...[Obama] believes deeply in change, and I believe deeply in change. And any time you’re fighting for that, I mean, I didn’t hear these kinds of attacks from Senator Clinton when she was ahead.”

Former presidential adviser David Gergen had said in January that Obama could pick up 60% of Edwards supporters, which could be very helpful given that even in last night's West Virginia primary, Edwards got 7% of the vote.

The endorsement will take place shortly--ABC News says it's to have it in time for evening newscasts.