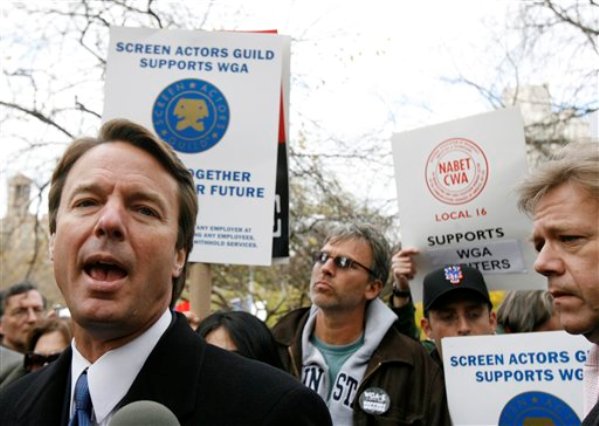 Barack may have Oprah, but the stagehands' and writers' union have John Edwards!

The former senator, currently in third place after Senators Hillary Clinton and Barack Obama in the hunt for the Democratic presidential nomination, voiced his support of Local One, the Broadway stagehands union that has been on strike since November 9 over a new contract. Democratic political consultant Hank Sheinkopf said, "To interfere with the power of the Broadway community is not smart, and the best thing to do as a politician is to stay out of it," so does that mean Edwards is a risk taker or just not smart?

Edwards is in New York and appeared at a Washington Square Park rally for the film and television writers earlier today. The Writers Guild of America has been on strike since November 5 in a dispute with producers over residuals from Internet and DVD distribution, and Edwards told the writers, "Stay strong, stay together. It's about making sure these big corporations, these big media conglomerates don't step on your rights — that you have a real opportunity to share in the work that you've been producing."

Edwards also mentioned some of his campaign ideas for the middle class: Stopping abuse from the credit card industry, raising taxes on families that make $250,000 or more a year, and banning predatory mortgages. And when Edwards supported the West Coast arm of the WGA, even the last remaining Munchkins from the Wizard of Oz came out.