John Edwards: "I Made a Serious Error in Judgment"

After confirming that he had an affair with a former NYC party girl-turned-filmmaker --but denying he fathered her baby-- former Senator, vice-presidential candidate, and presidential contender John Edwards spoke to both ABC News and CBS News about the situation. And, on the other side, a source described mistress Rielle Hunter as "an idiot, a fool, a moron, a faux guru, but not mean-spirited."

Edwards issued a statement (the full text after the jump), saying, "In the course of several campaigns, I started to believe that I was special and became increasingly egocentric and narcissistic." He expanded on his hubris to ABC News' Bob Woodruff, "I went from being a senator, a young senator to being considered for vice president, running for president, being a vice presidential candidate and becoming a national public figure. All of which fed a self-focus, an egotism, a narcissism that leads you to believe that you can do whatever you want. You're invincible. And there will be no consequences." 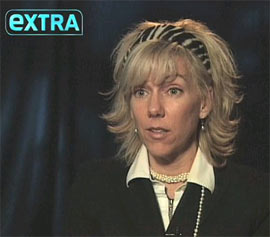 The National Enquirer had reported on his affair with Hunter last year, but Edwards kept denying it on the campaign trial, saying, "The story is false. It's completely untrue, ridiculous. I've been in love with the same woman for 30-plus years, and as anybody who's been around us knows, she's an extraordinary human being, warm, loving, beautiful, sexy and as good a person as I have ever known. So the story's just false." As the NY Times put it, his wife Elizabeth's public struggle with cancer while her husband campaigned made her a "hugely sympathetic character." Edwards claims he told his wife about the affair in 2006.

Hunter, had a baby girl on February 27, 2008, but Edwards said their affair ended too early for him to be the father. Adding to the mix, a former Edwards aide, Andrew Young, says he is the father and Edwards' national campaign finance chairman Fred Baron admitted giving money to Hunter and Young.

But Baron told the Dallas Morning News he wanted to get Hunter out of North Carolina, because of the tabloids, "I made a decision on my own, without talking to Edwards or anybody, to try to help them move to a community to try to get away from those folks." Baron added he used his own money, not campaign funds. When Edwards was asked about the National Enquirer photograph the tabloid claims to be him holding his love child, Edwards said he couldn't tell if it was him and said as a politician, he's holding many babies. 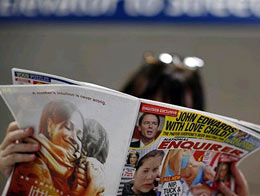 As for Hunter, she met Edwards at the Regency Hotel's bar in 2005. A source told the Post she was with a group at the time, drinking "like an old cougar fool...She's an idiot, a moron, a faux guru, but not mean-spirited." Novelist Jay McInerney met Hunter--then called Lisa Druck--back in 1987 and dated her. Thje main character in his book, "Story of My Life," was a "ostensibly jaded, cocaine-addled, sexually voracious 20-year-old who was, shall we may, inspired by [Rielle]." Hunter filmed a few campaign videos for Edwards, getting paid $100,000, though it's pointed out she had no experience making films.

Edwards said he has no plans to go the Democratic National Convention. Elizabeth Edwards has pleaded for privacy. And Hunter's sister has asked Edwards to take a paternity test, which Edwards claims he is willing to take. And here is Edwards' statement:

In 2006, I made a serious error in judgment and conducted myself in a way that was disloyal to my family and to my core beliefs. I recognized my mistake and I told my wife that I had a liaison with another woman, and I asked for her forgiveness. Although I was honest in every painful detail with my family, I did not tell the public.

n the course of several campaigns, I started to believe that I was special and became increasingly egocentric and narcissistic. If you want to beat me up — feel free. You cannot beat me up more than I have already beaten up myself. I have been stripped bare and will now work with everything I have to help my family and others who need my help.

Former Edwards campaign workers have expressed their disappointment. Former campaign manager David Bonior said, "Thousands of friends and supporters of Senator Edwards put their faith and confidence in him, and he has let them down. Young supporters who put their time and energy into his campaign with a newfound energy and idealism for politics have been betrayed by his actions. But the issues we cared about and fought for — poverty, worker justice, clean environment and health care for all — are issues worth continuing to fight.”

#affair
#elizabeth edwards
#john edwards
#regency hotel
#rielle hunter
Do you know the scoop? Comment below or Send us a Tip