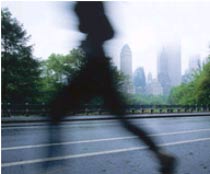 The Post reports that a woman running on the West Side managed to escape from a man who tried to rape her this past Saturday morning. According to the police, Jason Washington grabbed the 24-year-old woman from behind around 7AM. He then "fondled her and dragged her to an empty doorway near 12th Avenue and 58th Street."

Luckily, a loud truck "startled or distracted" Washington and the woman ran away and called 911. Washington, who lives at 55 West End Avenue, was captured by the police and charged with attempted kidnapping and sexual abuse.

Given the location, it seems that the woman may have been running near the West Side Highway, which is a popular running location, though around 7AM, that area might be pretty quiet. Here are some safety tips for running outside. Running clubs like the New York Road Runners Club offer ways to find running partners.