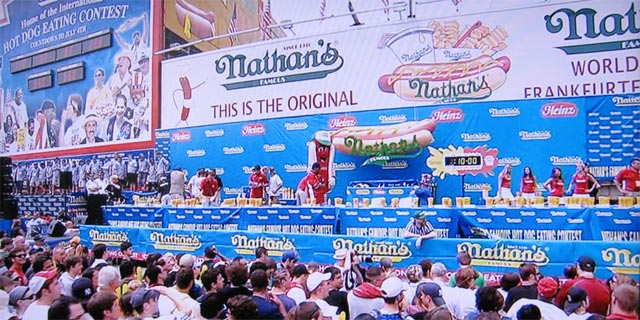 The air at Coney Island is charged as the annual Nathan's Famous Hot Dog Eating Contest will be underway in moments. Contributor Billy Parker is on the scene and tells us the Nathan's "Franksters" (hot dog mascots) had a dance "to the death": "The old Frankster had serious moves, while a newer Frank was booed." Tien Mao, hot dog enthusiast, and I will also be chiming in.

This year, the contest will be for 10 minutes, apparently a long forgotten rule. Last year, Joey Chestnut brought the Mustard Belt back to the U.S. by eating a record 66 hot dogs in 12 minutes, defeating six-time champ Takeru Kobayashi of Japan, who also ate a personal best 63 hot dogs. All eyes are on the Chestnut-Kobayashi showdown, but ESPN is suggesting Patrick Bertoletti might be a dark horse. Bookmakers either have Chestnut favored or say Chestnut and Kobayashi are dead even.

12:16 p.m. Billy Parker: Right now, George Shea is saying the Jonas Brothers is the greatest rock band in the history of the world. He's stalling for time big time...Crowd is announced at 35,000...Eric "Badlands" Booker is performing his third rap. 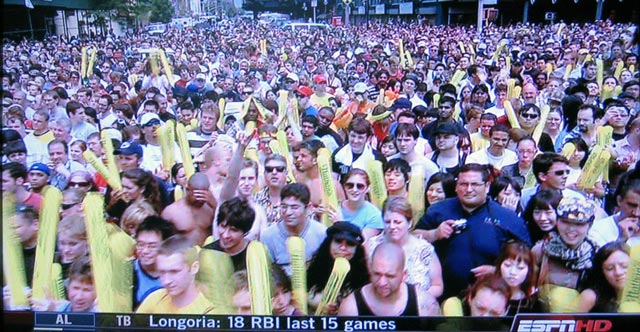 Ah, the introductions are now starting for the eaters...

12:30 p.m. Billy Parker: Chant of "Put a shirt on" as Dr. Bigtime enter, showing off his amateur bodybuilding abs.

12:37 p.m. Kobayashi is introduced-his hair is red (ketchup?) and orange (special sauce?). Then Chestnut is introduced--the rematch is coming soon!! 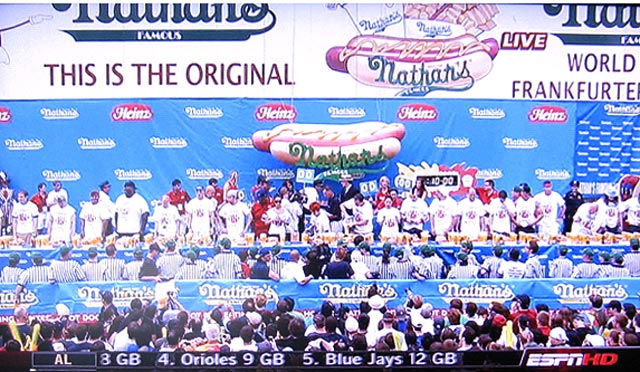 12:42 p.m. The eating begins! Kobayashi and Chestnut are next to each other.
Tien Mao: Did you hear the commentator say they "attack those dogs like lindsay lohan attacks a minibar" 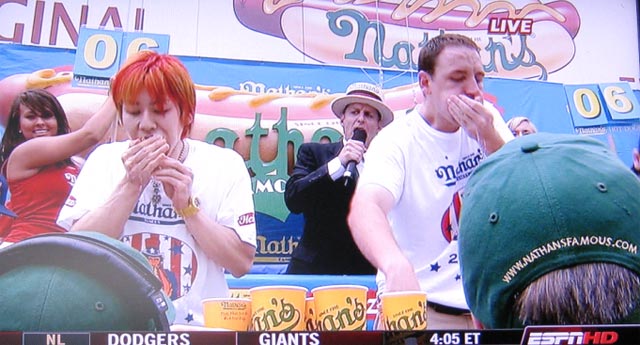 12:43 p.m. Chestnut is in the lead, with Kobayashi close behind. Bob Shoudt and Tim Janus are closely following, with Betroletti rounding out the fifth.
Tien Mao: Kobayashi's new method is to stuff a wet bun in and then shove the hot dogs in." [Versus the Solomon method]

12:45 p.m. ESPN's Jimmy Dykes says Kobayashi is getting crushed by Chestnut, who has eaten 32, while Kobayashi is trailing. But just as he says that, Kobayashi seems to catch up.

12:37 p.m. Chestnut and Kobayashi are tied at 40 dogs a piece.
Tien Mao: The Tsunami is winning, but anything could happen, like a reversal of fortune.

12:49 p.m. ESPN thinks Chestnut is having trouble. Is Kobayashi over his jawthritis?
Billy Parker: There's a much bigger Kobayashi presence among the crowd this year.
Tien Mao: With two minutes to go, it's like mile 20 for a marathoner. When their bodies just hit a well.

12:51 p.m. The two leaders are bouncing, in trying to keep their food down. Kobayashi has a one dog lead, with 57 dogs donwn. 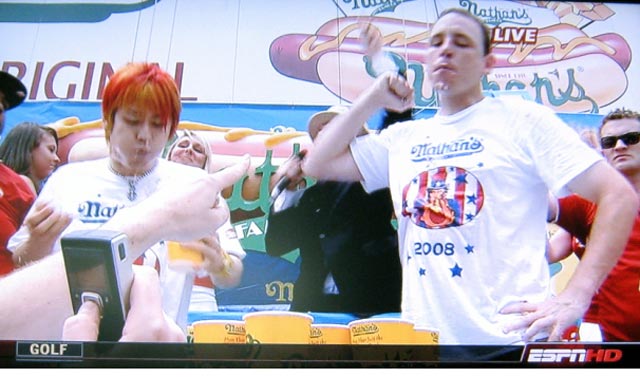 12:54 p.m.: Joey Chestnut WINS AGAIN! He managed to eat five hot dogs faster.
Tien Mao: I think Kobayashi might have ducked under to spit the rest out. And he had some spewage when he was down to the end. A spray of fluid came out

12:59 p.m. ESPN asks Kobayashi what the difference was in today's condition. He says, "There wasn't a big difference, just one hot dog...I think I lost because I wasn't quick enough in the rematch for the five hot dogs." And when asked if we'll see him again, a definitive, "Of course."

1:00 p.m. Chestnut's reaction when he was told about the five dog eat off? "Oh, darn." He says he loves to eat and loves the competition. Chestnut says the difference between him and Kobayashi is that though Kobayashi wanted the Mustard Belt, "I needed it."
Jen Chung: Joey has the meat sweats!

#hot dog
#hot dog eating contest
#joey chestnut
#liveblog
#nathan's famous
#takeru kobayashi
Do you know the scoop? Comment below or Send us a Tip
A new Gothamist is coming! We’ve moved comments over to our beta site. Click here to join the conversation and get a preview of our new website.