Joba Apologizes to Yankees and Fans 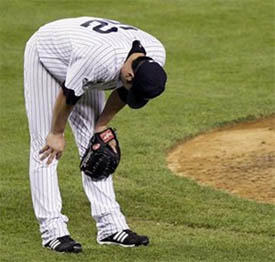 Yankees pitcher Joba Chamberlain issued an apology last night for his DUI arrest over the weekend, where he was found with a blood alcohol level of 0.134--well over the 0.08 limit in Nebraska. In his statement to the Yankees and the fans, he said, “I want to apologize to the New York Yankees and the fans for an error in judgment and for putting myself in a difficult situation. I intend to properly resolve this situation, and do not intend to be in such a situation again. My goal is to focus on pitching for the Yankees in the 2009 season.”

While Joba’s apology speaks for itself, Hank Steinbrenner got in on the action vowing to get Chamberlain help if he needed it and saying that, “It happens. Everybody deserves a second chance - or even a third chance." The Yankees have given multiple chances to far worse problems than Joba’s from Billy Martin to Steve Howe and there is no reason to expect Joba not to get the full support of the organization. But, driving around in a car with an open container shows a recklessness that needs to be examined and the Yankees need to make sure this isn’t a sign of a deeper problem.

Chamberlain's arrest is especially unfortunate given his role model status in his home town of Lincoln, Nebraska. Earlier this year, The Times talked to an elementary school principal in Lincoln who said, "For Lincoln to have someone like Joba, it’s the ultimate dream of little kids here" and that "teachers use Joba a lot as an example of work ethic and following your dream."

Now that the role model status is gone, the biggest responsibility lies with Joba. Youthful mistakes can be forgotten, but only if they are not repeated. Let’s all hope this is the last time we hear about Joba outside of the sports section (aside from when he's arraigned in December).

#baseball
#Hank Steinbrenner
#joba chamberlain
#sports
#Yankees
Do you know the scoop? Comment below or Send us a Tip