JFK Hiring People To Help Screen For Ebola For $19/Hour

Ebola watch continues this weekend, as more than 100 people in Ohio are being closely monitored because of contact with the Dallas nurse who tested positive for Ebola. Officials need more than a little help with the ramped-up Ebola screenings around the country, especially at airports—so they've enlisted a government contractor to help hire people to screen potential Ebola patients. 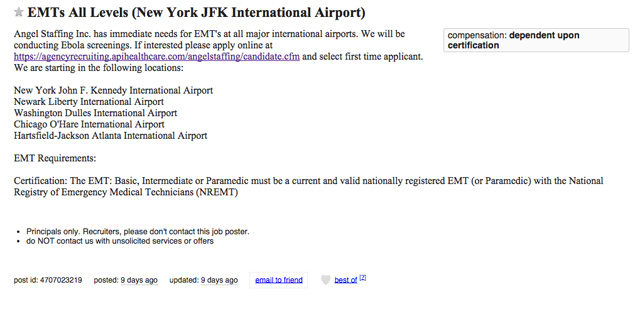 The Post reports that Angel Staffing Inc. has begun hiring people with basic EMT or paramedic training to assist Customs and Border Protection officers and the Centers for Disease Control and Prevention in identifying possible victims at Terminal 4 at JFK. While some employees there went on a strike a few weeks ago because of fears about their safety with the Ebola panic, these fearless EMTs will earn $19 an hour and paramedics will earn $29 to take people's temperatures and ask them a series of security questions about their travels and who they've been in contact with.

JFK is one of five major international airports—including Washington Dulles, Newark Liberty, Chicago O’Hare and Hartsfield-Jackson Atlanta—that have started implementing the enhanced screening procedures. Custom officials say that over 150 people travel from or through the three Ebola-afflicted countries to the US every day.

The internet is filled to the brim with hot takes and cold showers on the Ebola crisis: want to blame Obama? Glenn Beck is right with you. Want to abstain from wonton hysteria? Obama is right there with you. Want to be scared out of your mind about what's to come? Go ahead and let your imagination run wild. Want to know what it's like to be live in uncertainty under quarantine? The Times is on it. Want to joke around Ebola in public? Well, don't do that.