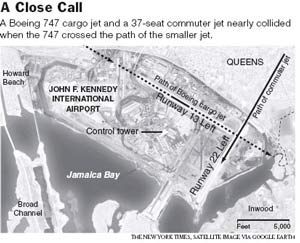 Just the kind of thing needed for everyone to continue questioning in the current air traffic control situation at area airports. Two planes almost collided on Sunday at JFK Airport. Senator Charles Schumer said that an air traffic controller said, "That was the closest I have ever seen two airplanes get together."

According to the NY Times (also, see image at right), a "37-seat commuter jet" almost collided with a "Boeing 747 cargo jet on Sunday afternoon when the Boeing, which was supposed to land on a perpendicular runway, failed to do so and continued across the smaller jet’s path." Apparently, in order to deal with the air traffic, JFK Airport has been "increasingly using perpendicular runways ." The commuter plane, an American Eagle plane, "pulled up in time to avoid a crash."

The FAA says nothing out of the ordinary was noted in the transmission reports, but Schumer believe that this, the latest in a number of near misses, proves that JFK, LaGuardia and Newark airports need more advanced radar. The FAA says the new surveillance equipment will installed by 2010, "We just don't go into a store and pick it off the shelf. We have to develop schedules and sites have to be engineered. That work is ongoing in New York."

And, as a way to ease air traffic congestion, the federal Transportation Department will limit the number of flights at JFK Airport. Experts tell the Times that LaGuardia and Newark airports' flights would also become limited, "because the caps at Kennedy could lead airlines to shift some flights to those airports."