Jewelry Designer Claims She Was Tortured by Macy's Heir 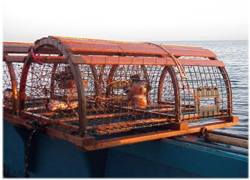 The great-grandson of one of an early owner of Macy's is being accused by a 52-year-old jewelry designer of imprisoning the woman and torturing her with, of all things, a lobster trap. Bette Marchek claims that William Straus kept her captive on his Westchester estate, starved her, beat her, and eventually attacked her with a lobster trap while the pair were on City Island in the Bronx. That was the figurative straw that broke the camel's back for Marchek. She fled Straus's 100-acre estate in Pound Ridge and sought refuge in a shelter for battered women.

"It has been a nightmare," Marchek said. "He crushed the whole right side of my body. I can't even walk to the Stop and Shop. I feel like some kind of subcreature."

Straus vehemently denies the charges that he will face next week in Bronx criminal court. The 53-year-old is the great-grandson of Isidor and Ida Straus. Isidor Straus purchased Macy's from R.H. Macy with his brother in 1896, after he'd worked at the iconic retail store as a salesman. The Strauses perished in the sinking of the Titanic in 1912, famously refusing to board lifeboats in deference to younger passengers. Straus Park on the Upper West Side at 106th and West End Ave. is named after the husband and wife.

#bronx
#city
#city island
#court
#Ida
#isidor
#macy's
#news
#park
#pound ridge
#straus
#Straus Park
#torture
#Upper West
#Upper West Side
#west end
#west side
#westchester
Do you know the scoop? Comment below or Send us a Tip
A new Gothamist is coming! We’ve moved comments over to our beta site. Click here to join the conversation and get a preview of our new website.