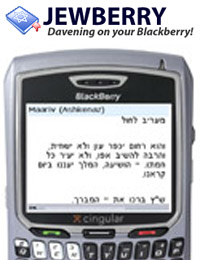 Two Jewish entrepreneurs have developed software that can turn an average BlackBerry into a sacred prayer book. They've dubbed their upgrade "The JewBerry," and have sold it to over 10,000 customers for $30 a pop, according to the Post. Co-creator Jonathan Bennett explains the appeal: "Throughout the day, Jews gather in office-building stairwells and conference rooms to pray, and while sometimes you might not remember your prayer book, no one goes anywhere without their BlackBerry."

A review of the software on BerryReview notes that Pocket PCs and Palm devices have had Hebrew texts on them for over 5 years now, but this is the first such software available for BlackBerry users. The reviewer decides that "having micha and maariv in my pocket more than pays for the purchase price if you can ignore the minor kinks." Last month, during the Jewish New Year, the Times spotted the trend of men standing outside synagogues feverishly using their cellphones and BlackBerrys to check in with work.

Yeshiva University President Richard Joel tells the Post, "I love it, because now I can not only look how the market is doing, but I can also say my evening prayers." And using GPS technology, the software will soon enable Jews to create minyans—the 10-member groups necessary for prayer. Bennett elaborates: "Say you're in a place like Shea Stadium. You could post that you are looking for a minyan, pick a location, and other people signed up will be able to respond and meet up at the Carvel stand."

#blackberry
#jewberry
#new
#PDA
#prayer
#technology
Do you know the scoop? Comment below or Send us a Tip