Just 36 hours after his team's surprising win over the Patriots, the Jets' Braylon Edwards now faces drunk driving charges! The NY Post reports that the wide receiver was "arrested at 5:15 a.m. and charged with DWI, after cops pulled over his Range Rover at 34th Street and 12th Avenue for having overly-tinted windows. Police said they smelled alcohol and Edwards blew a 0.16 on a Breathalyzer, or double the state's legal limit of 0.08."

Edwards's passenger doesn't seem to be charged—maybe he/she is trying to get a lawyer for Edwards, who is "currently in police custody, and will be arraigned later today." Last year, Edwards was charged with assaulting a man outside a Cleveland nightclub—the victim, a club promoter, claimed it was over a beef with LeBron James, "Braylon comes up and started saying things, degrading me. He said if it wasn't for LeBron (James) or the Four Horsemen, I wouldn't have what I have, nor would I be able to get girls. Everyone knows Braylon has a problem with LeBron. So I had to speak up for myself. The conversation started to escalate. As some of his teammates started to pull him back, he punched me. I have a black eye and a cut. I'm not a violent guy... As long as I've known Braylon, I've allowed him and his friends to come into our events free of charge. Whatever jealousy he has with LeBron, he felt he needed to take it out on me." The Post says Edwards "settled the case by pleading no contest to aggravated assault. He received a suspended 180-day jail sentence, and was fined $1,000 and placed on probation."

One person on a Patriots fan messageboard said, "This latest news just frustrates me. A little too late for our liking, ya think? Just twists the knife a little."

Update: The Jets released a statement: "We are very disappointed in Braylon's actions this morning. The Player Protect program is in place for our organization to prevent this situation. Braylon is aware of this program and showed poor judgment... We are reviewing the information with the league and will impose the appropriate disciplinary measures." Athletes can call Player Protect for car service to avoid these kinds of situations. 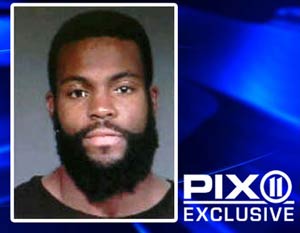 Update, 12:30 p.m.: WPIX got his mugshot and added this reminder of what happened one night that Edwards was partying:

In July 2009, Edwards was drinking with fellow wide receiver Donte Stallworth at a Miami hotel and nightclub, racking up a bill of totalling $3,443, which included $1,500 on Perrier-Jouet Rose champagne and $695 on Grey Goose vodka. Stallworth's credit card receipts showed he sent a $375 bottle of Patron Silver to Edwards' table, and ordered five shots of the tequila for $90.

After their night of drinking, Stallworth fatally struck 59-year-old pedestrian Mario Reyes with his vehicle. Stallworth was sentenced to 30 days in jail after pleading guilty to DUI manslaughter and suspended from the team.