Jets to Find Out if Patriots Are Larger than Life 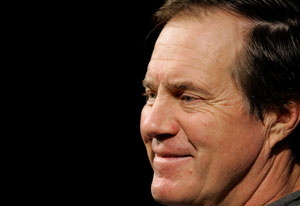 The spread opened at 27 points. It's recently settled at 24 1/2 points, which, if held, would be the largest ever for an NFL game. More went into that spread than a terrible team playing an unbeaten one on the road. The Patriots have been running up the score on opponents all year, and everyone thinks they're doing it to teach the league a lesson after it was exposed -- on the word of jets Coach Eric Mangini -- that New England was recording the Jets' defensive signals during a Week 1 win in the Meadowlands.

Patriots Coach Bill Belichick and Mangini don't appear to like each other very much anymore, but they say everything is normal this week. The media have been known to make a big deal out of games before, and this doesn't seem like a situation where the coaches' hatred for each other will be demonstrated by the players. The Pats have treated every team they've played this year the same -- they've tried to kill them. Will they be extra spiteful toward the Jets? Will the Jets be more eager to prevent a blowout than other NFL teams?

The Jets' best chance for hanging tough may be the weather. A winter storm may keep the Patriots' passing game under wraps. Trying to beat a team in snowy weather is hard enough. Snow may rob the Patriots of the chance to embarrass the Jets.