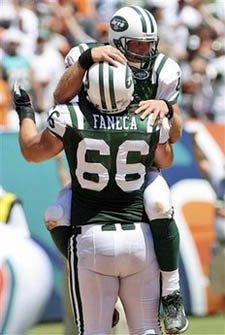 With the amount of love lost between the Patriots and Jets, don't think Eric Mangini and Co. sent a condolence card to Foxborough after Tom Brady's knee got torn apart. But also don't count on the Patriots' rolling over and dying in the 2008 season. They may have lost one of the game's top all-time quarterbacks, but they still have one of the game's all-time coaches in Bill Belichick. Even without the tangible benefits of Brady and the potentially tangible help from filming team's defensive signals, Belichick's Patriots will be tough to handle.

The Jets come into this week's game following a 20-14 win over Miami. Brett Favre looked mostly sharp in his Jets debut, completing 15 of his 22 passes for 194 yards and two touchdowns. One of those two scores was lucky -- to say the least -- but he didn't try to cram too many other passes in. He involved Jerricho Cotchery, who had a 56-yard touchdown catch, and Chansi Stuckey, who caught the floater. But Laveranues Coles, still sulking about the departure of Chad Pennington, only caught one ball. Thomas Jones, who had all of one rushing touchdown last season, found paydirt in Week 1. Mike Nugent did hurt himself, so the Jets have Jay Feely in to kick field goals.

Jets fans who are bullish about their team's chances should remember how good the Jets looked against the Dolphins in 2007. Then they should think about how poorly the team played in the other 14 games. The Jets have lost seven straight against the Patriots at the Meadowlands. That streak could end Sunday, but nothing will be easy.

#brett favre
#Eric Mangini
#football
#jets
#sports
Do you know the scoop? Comment below or Send us a Tip