Jets Look to Slay Another Giant 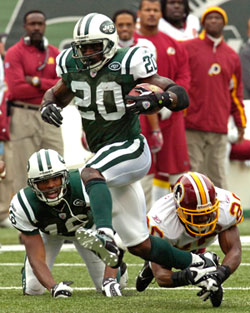 When the NFL scheduled the Jets to play the Cowboys on Thanksgiving back in the spring, it had to think it was going to get a good game between two 2006 playoff teams. Unfortunately for the league, only the Cowboys have lived up to expectations this season. Still, the game is better than some of the duds of recent years. The Cowboys look like the best team in the NFC -- which could make them the fourth-best team in the AFC -- and they'll need to keep it up if they want to have home-field advantage in the playoffs.

The Jets can think about home field, but only in 2008. Sunday's upset of the Steelers was a rare bright spot for this underachieving bunch, but with that win, maybe they have turned the corner. Kellen Clemens doesn't create the same gloomy feeling among Jets fans that predecessor Chad Pennington did. They've been in the last two games he's started, and they used fourth-quarter drives to tie the game in each. If he could take down the Cowboys on the road, the Jets may start to think they have someone special.

The other story in this game -- and one that is sure to be beaten into the ground on Thanksgiving -- is the Brothers Jones matchup. The Jets' Thomas faces the Cowboys' Julius. They'll never be on the field at the same time, but they did share a Thanksgiving meal a day early in Dallas. Thomas is probably the better back, though Julius clearly has the better team, and, barring another Jets miracle, should see that proven on the field.

The Jets face off against the Cowboys in Dallas at 4:15PM on CBS.