Jets Have No Excuses Left Versus Bills 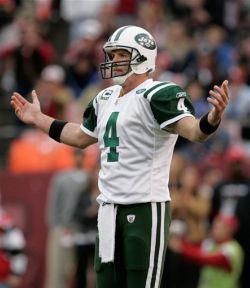 How quickly things change in two weeks. After a win over the Patriots and an impressive rout of the Titans, the Jets had everyone buzzing. Then they looked atrocious in a lopsided loss at home to Denver. Did they get the message? Apparently not. They traveled to San Francisco and got beat up by the 49ers. The 24-14 score in that game doesn't come close to doing justice to how thoroughly the Jets found themselves outplayed. San Francisco held the ball for nearly 40 minutes.

To be fair to the Jets, Denver is a playoff team. So that loss is forgivable. Thee 49ers are not a playoff team. Yes, they're playing better than their record and Shaun Hill is a better-than-decent option at quarterback. But after the humbling by Denver, why did the Jets show up so flat on the West Coast? If the Jets hadn't gotten lucky in New England—and be honest, they were—they would be in deep trouble in the division.

What's left? A must-win game against Buffalo this week at home. J.P. Losman—not regular starter Trent Edwards—will be playing quarterback, and Buffalo is all but out of the playoff hunt. (They need to win out, have the Patriots lose out and have the Jets and Dolphins lose two games each and then tie each other Week 17. That sounds likely.) The Bills ground game is a disaster, and the Jets won the Week 9 meeting between the two clubs in Buffalo. Even if the Jets do what they have done recently—mismanage the running game and limit Brett Favre to wide receiver screens—they should be able to handle a flat Bills team. After this, they travel to Seattle and host Miami. Seattle is no good, but the Jets have lost all three games they've played on the West Coast. Panic may be setting in by habit on Jets fans, but if the team finds a way to lose this week, said hysterics will be legitimate.