The New York Jets are a disgrace to devoted fans, but one man took it to the next level by Tweeting things like, "DON'T COME TO PRACTICE WEDNESDAY I PROMISE YOU BULLETS EVERYWHERE .. @Mark_Sanchez", SANCHEZ BETTER HAVE ARMED SECURITY WEDNESDAY AT PRACTICE !! YOU THINK IMMA SIT HERE & WATCH THIS BULLSHYT ?? TUHHH @nyjets" AND "TAKE A GOOD LOOK AT YOUR KILLER !!" with photograph of himself. However, Brave Grancru insists they were not serious in any way: "It's just a Tweet. It's my account and I Tweeted something."

Grancru told the Star-Ledger that, yes, he had been drinking during the game but he was just blowing off steam, "People get threatened every day on Twitter. Because it's Mark Sanchez it doesn't make it (any different). If I'm in trouble, everyone should be in trouble, you understand what I'm saying? I apologize, it was wrong my remarks, but they're just Tweets. It's not like I'm in a stadium shouting in his face, I'm not going to his house or going to practice. It's just a Tweet. It's my account and I Tweeted something."

The 25-year-old also said that he lost $700 on the game and whined to the Daily News, "“I feel like Sanchez is doing all of these turnovers on purpose."

The Jets are aware of the threats and the NFL offered their assistance. However, Grancru says no one from the team or NFL has contacted him—and he might be disappointed. He told the Star-Ledger, "I want answers from the whole Jets organization, I'm a die-hard fan... I apologize for what happened, but I want to talk to someone in the Jets organization. That's what I want. It's Christmas time, so just grant me that." But doesn't Grancru fall under Santa's "naughty" list with a Tweet like this? 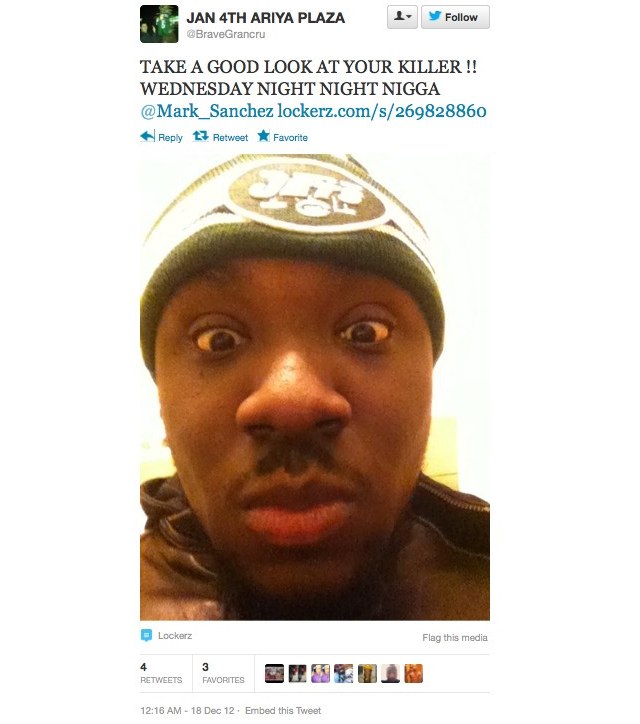 #Death Threat
#football
#jets
#mark sanchez
#twitter
Do you know the scoop? Comment below or Send us a Tip
A new Gothamist is coming! We’ve moved comments over to our beta site. Click here to join the conversation and get a preview of our new website.