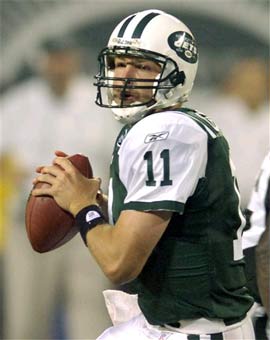 As the Jets look ahed to their game Sunday against the Cleveland Browns, they may be hoping that's where they are in a season or two. Cleveland, like the Jets, is coached by a former defensive protege of Patriots Coach Bill Belichick. Romeo Crennell had a rough go of it during the first few seasons, but he now has an offense filled with playmakers like Braylon Edwards and Kellen Winslow and run by an unheralded quarterback in Derek Anderson.

Cleveland has been one of the best stories in the NFL this season, but the Jets can try to derail its playoff bid with a win Sunday. Jets Coach Eric Mangini will do his best to upend the season of his former boss -- back when Mangini was a secondary coach and Crenell was defensive coordinator.

Player personnel will be a major factor in this one. The Jets may be able to pound the Dolphins without being at full strength, but these Browns have won a game this season. Jerricho Cotchery is probably out with his finger injury. Despite Laveranues Coles' near-heroic efforts last week, he may not be ready to play this week. As noble as it is for him to want to be out on the field, the Jets do themselves the most good by losing these games for their draft position, so he shouldn't kill himself or risk further injury. With a daunting schedule the rest of the way, the Jets won't have time to think about the draft pick. Also, New York fans can thank the 4:15 p.m. start for preventing the Patriots-Steelers game from being shown locally.