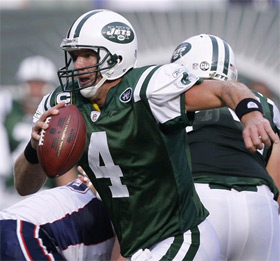 When ESPN secured this game for Monday Night Football, the network couldn't have dreamed that it would be a Brett Favre showcase. It also wouldn't have bet that the Chargers would be 0-2 after losing two of the most heart-wrenching games possible. The 1-1 Jets will be facing a team that all but needs a win to keep its season alive.

Eric Mangini's club looked just good enough in Miami in Week 1 and more than bad enough to lose at home against New England in Week 2. San Diego, record aside, is better than those teams at full strength. But will the Jets have to worry about stopping all-world tailback LaDainian Tomlinson (who has turf toe), or will Darren Sproles have to fill in?

Another burning question is that of playcalling. Brett Favre appeared to be reined in during each of his first two games. Maybe it was a decision by Mangini, or maybe Favre still doesn't know the whole playbook. But the Chargers defense isn't that sharp. Maybe Mangini will take the shackles off. But will Favre find his 2007 form, which looked like a disciplined passer, or will he showcase his chucking ways of other recent seasons? Time will tell. With Arizona on horizon, the Jets don't need this game as much as San Diego. That's good, because they won't win it.

#brett favre
#Eric Mangini
#jets
#sports
Do you know the scoop? Comment below or Send us a Tip
A new Gothamist is coming! We’ve moved comments over to our beta site. Click here to join the conversation and get a preview of our new website.