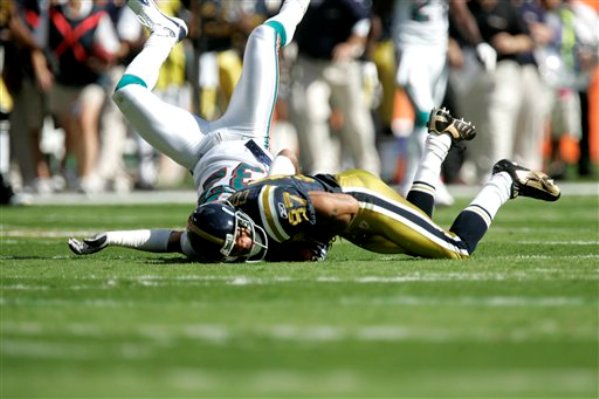 Maybe the Jets shouldn't have been underdogs against the Dolphins, but no one figured they'd roll as easily as they did in their 40-13 win in Miami on Sunday. Miami remained winless at 0-12 as the Jets improved to 3-9 -- with two of those wins coming against Miami.

Playing without Jerricho Cotchery and his finger injury, the Jets did have Laveranues Coles back earlier than expected from a high ankle sprain. He responded with five catches for 69 yards. The Jets ground game also came to life. Leon Washington had two touchdowns and Thomas Jones -- finally! -- found the end zone. After hearing that scores against the Dolphins still count, Thomas said he was keeping the ball.

But what about the Jets' attitude after this game? Shaun Ellis sounded off on the Jets' underdog status. “That goes to show that the people that sit behind the booth don’t know what they’re talking about,” defensive lineman Shaun Ellis said. “It just frustrates me, that talk. It’s just disgusting. That’s why I don’t even watch that stuff. They’re just trying to boost their egos.” But what has the team done this year that it can be that upset it's not favored in a road game? Coach Eric Mangini no doubt used the spread as motivation for the Jets, but some restraint from ripping into people who dared to doubt them would also have been nice.