Jets Can Get Back on the Horse in San Francisco 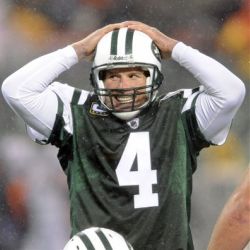 Talk of the Jets juggernaut's rolling to the Super Bowl lost some of its volume last week after a sloppy loss at home to Denver. But New England lost at home to Pittsburgh, and that means the Jets hold their one-game lead in the AFC East. Guess which teams have the easiest schedules the rest of the way? That's right, the Patriots and the Jets, in that order.

San Francisco is a tricky game, however. Quarterback Shaun Hill is a lot better than people give him credit for. He has taken over for J.T. O'Sullivan and has been more than capable. He has played well in a loss to Dallas and won two of his other three starts. Frank Gore is nearing a 1,000-yard season. The Jets are not big favorites in this game.

What should they do? More of what they have been doing. Have Brett Favre complete everything -- the "gunslinger" is first in completion percentage but second-to-last in yards per completion. As for the running game, Thomas Jones owes his offensive linemen some big Christmas gifts. He has a chance at the Jets' single-season records for rushing touchdowns and all touchdowns.