Jets Aren't Quitters, But They Aren't Good Either 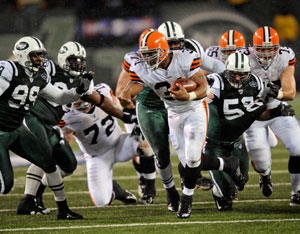 With the Jets 3-10, the best thing that can be said about them is that they're still playing hard. They seemed insulted that people thought the Dolphins could beat them last week, and, despite playing in front of empty seats in a heavy rain Sunday, the Jets fought back before losing to the Browns, 24-18. Kellen Clemens scored the Jets' only touchdown with his quarterback sneak in the fourth quarter, but his inconsistent play and critical second-quarter interception hasn't inspired any confidence in Coach Eric Mangini. In fact, Mangini wouldn't even say if Clemens would start next week against the Patriots.

Clemens' performance received a boost with the play of Jerricho Cotchery and Laveranues Coles. Neither looked likely to play, but on Sunday, each found a way out on the field. Cotchery had a splint on his finger, and Coles was bothered by a high-ankle sprain.

But when the nicest thing you can say about the Jets is that they're working hard and playing through pain, something's wrong. This is professional football, not Pop Warner. Their comeback effort was admirable, but it would have been better if they had found a way to stop Jamal Lewis on a critical third down. Recovering onside kicks by Mike Nugent feels great, but not needing to try them should always be the first option.

Next week is the grudge match. Mangini turned in New England Coach Bill Belichick for filming signals during the Week 1 game between the two clubs. That didn't help the relationship between the two former colleagues, and, at 13-0, the Patriots have been making a habit of trying to embarrass their opponents. The Jets hope they're not next.