Jets and Edwards, Together Again 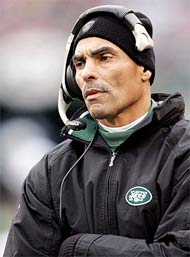 While much of the football excitement this weekend surrounds the New York Giants' game versus the New England Patriots tonight, the Jets still have an interesting Week 17 matchup.

The game against the Kansas City Chiefs isn't what the NFL had in mind when it drew up its schedule. Both the Jets and Chiefs were playoff teams from a year ago, but the teams have looked awful this season, with young quarterbacks and veterans competing trying to see who is worse. For the third time in four weeks, the Jets serve to prevent New York from seeing a game with wider appeal, but this game has got a few storylines to it.

The biggest is Herm Edwards' (pictured) coaching against his former team, which he shepherded to the playoffs but never took over the hump. Now he and the Chiefs will find themselves near the Jets in the top part of next year's draft. Neither Edwards or Jets Coach Eric Mangini is where he wants to be in his second year with his team, but who stands a better chance to escape the NFL doldrums? The loser of this game could improve its position in the NFL draft, but each team is more than a high pick away from building a perennially competitive team.