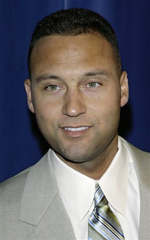 Derek Jeter's mom is claiming that her son wouldn't cheat on his taxes, days after the NY State Dept. of Taxation and Finance claimed that the Yankees captain owed the state hundreds of thousands, if not millions, of dollars in back taxes. Jeter says that his primary residence is in Florida, which doesn't have a state income tax. He does, however, live in the Trump World Plaza building on 1st Ave., across from the United Nations. His mom railed against the media for giving her boy such a hard time, asking if they had children and saying how hard it was to hear her son described as a tax evader. "You're going to give me a heart attack."

describes how tax auditors determine whether people are being truthful about where they live when filing their taxes. It's an inexact science; "But the auditor can make an educated guess." A salient clue in the Jeter case may have been that he's the shortstop for the New York Yankees.

With so much money on the line, tax professionals think that Jeter can expect a thorough vetting. ""New York goes after everything. Phone bills, credit cards bills, E-ZPass, you name it, they go after it," said one such expert quoted in the New York Post. State officials will apparently comb through every detail of Jeter's life to determine where exactly he's been spending his time.