A JetBlue flight from JFK Airport to Los Angeles had to land in Denver, because of an "unruly passenger." Images from a cellphone video shows a male passenger being led from the plane in handcuffs. 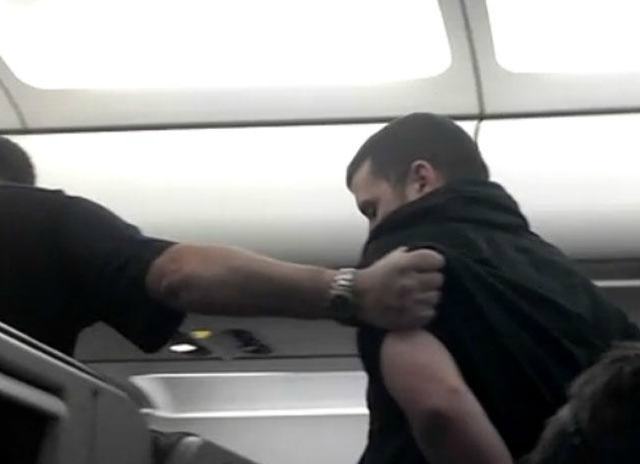 Update: Film producer Cassian Elwes was on the flight and Tweeted about the ordeal—it turns out that the man who was detained, apparently named Marco, had been occupying his seat.

Elwes traded what was probably Marco's seat (in the middle) with a Japanese couple, whose seats had been split... but then the couple became uncomfortable with Marco's behavior, which included ripping out magazine pages, licking them, and putting them on a monitor and yelling "fuck you" to an off-duty air marshal. Elwes said, "I'm feeling quite guilty for switching with the japanese couple in the first place and volunteer to sit next to him." And Elwes chatted with him, trying to reassure him and keep him distracted, "You're fucking security he says again to me. No I'm not. I'm going to sit down and were going to talk about films. Do you like films. Yes"

Marco told Elwes that he was a Marine and at one point, "He pulls out a canister from his pocket filled with little green pills. He swigs from it. The plane jolts and the pills fly everywhere." Another passenger Googled the pills and found it was "clonazepam a drug for bi- polar anxiety." Elwes writes, "I realize the point is these wars are fucking with our children's minds. A whole generation is being sent home screwed up," and said that he wrote in his FBI statement, "I write that I used to be william morris agent and I've dealt with difficult people before and really this guy wasn't that difficult."

#air travel
#Cassian Elwes
#jetblue
#jfk airport
#los angeles
#unruly passenger
Do you know the scoop? Comment below or Send us a Tip