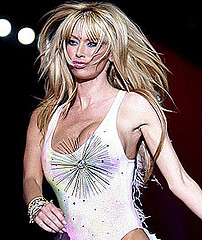 Earlier this year news of new clubs opening doors in Chinatown emerged, and it seems "clubland" is steadily growing in the 10013. The latest duo to stamp their name on a future hotspot are none other than ex-porn star/savvy-businesswoman Jenna Jameson and Heatherette designer Richie Rich. Though an exact address hasn't been released, the NY Post reports that it will be called The General Store and it will be housed in an old whorehouse. Sounds very Old West, which makes us wonder why ex-cowboy/other half of Heatherette, Traver Rains, isn't mentioned as being involved.

The brothel-turned-bar will also boast a store in front "where the duo will sell Richie's designs and clothing picked by Jameson" (the latter is pictured wearing the former's clothes on the runway). With Sting and David Bowie's burlesque joint opening up on Kenmare Street, this area of downtown is well on it's way to becoming New York's "red light district"!