Jeffrey Epstein Dead After Being Found Unconscious In His Jail Cell

The NYC Medical Examiner's confirmed that they are investigating the death of a man named Jeffrey Epstein who had been incarcerated at the federal jail. "Cause and manner of death are pending investigation," the spokesperson said.

The 66-year-old was reportedly discovered around 6:30 a.m. According to NBC New York, "The sources said he hanged himself."

The Federal Bureau of Prisons released a statement confirming that Epstein was found at 6:30 a.m., saying that "life-saving measures were immediately initiated by responding staff," who then asked for emergency services while continuing their efforts. Epstein was taken to the hospital "for treatment of life-threatening injures." Hospital staff later pronounced him dead.

The FBI is investigating his death.

Jeffrey Epstein hanged himself at MCC. He was taken to the hospital just after 630 am

"A gurney carrying a man who looked like Epstein was wheeled into New York Downtown Hospital around 7:30 a.m. A call for a reported cardiac arrest came in at 6:38 a.m., Fire Department sources said," the NY Post reports.

Multimillionaire Jeffrey Epstein found dead in cell this morning of an apparent suicide. The NY Post has photos of paramedics trying to revive. https://t.co/abQMlfzmqN

Brown wrote in the Herald, "The suicide...short-circuits what would have been a spectacular sex-trafficking trial that likely would have drawn in an array of prominent witnesses. Epstein had a constellation of important friends in business, political and society circles, including former President Bill Clinton and President Donald Trump."

Esptein, who pleaded not guilty to the sex trafficking charges, was being held without bail at the downtown Manhattan federal facility. Two weeks ago, Epstein was found with neck injuries in his cell, after what some suggested was a suicide attempt. It was not immediately clear what additional measures, if any, were taken by prison officials to monitor Epstein.

He had been accused of running a decades-long "sexual pyramid scheme" of enticing girls as young as 14 to give massages to him for money—and then sexually abusing them—before giving them more money to recruit other girls to work for him. 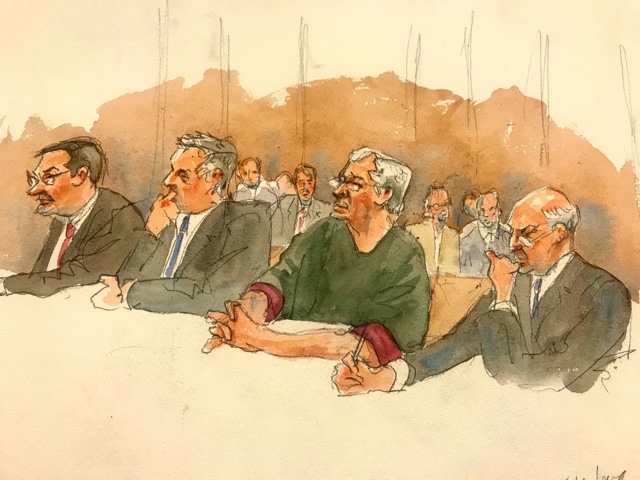 On Friday, thousands of pages documents from a 2015 federal defamation case brought by Virginia Giuffre were unsealed. Giuffre was suing Ghislaine Maxwell, a British socialite and close friend of Epstein, accusing Maxwell of recruiting her to give massages to Epstein when Giuffre was 15; Giuffre was a locker room attendant at Mar-a-lago, Donald Trump's Palm Beach club, at the time. Giuffre says she was kept as a teenage sex slave for Epstein and his powerful friends, claiming that she was forced to have sex with powerful men, such as Prince Andrew, former U.S. Senator George Mitchell of Maine, former governor of New Mexico Bill Richardson, “a well‐known Prime Minister and other world leaders."

The court documents included a deposition from someone who said that he was asked to "recruit high school-aged girls for Epstein, and also testified that Maxwell and Epstein participated in multiple threesomes with Virginia Giuffre" as well as one from a butler who said a distraught and crying 15-year-old girl told him that she was asked to have sex and threatened ("Yes. I was threatened by Ghislaine, not to discuss this.’").

Epstein, who claimed to manage millions for other wealthy individuals, owned homes around the world and had at least one private plane. His lawyers had tried to argue he should be freed under house arrest in his $77 million Upper East Side mansion, but Judge Richard Berman denied the request, noting "the government has established danger to others and to the community by clear and convincing evidence."

In recent years, Epstein had been working on expanding his mansion on an island in the U.S. Virgin Islands that locals called "Pedophile Island." He also owned a huge ranch in New Mexico where, according to a NY Times report, he hoped to impregnate many woman and "seed the human race with his DNA."

This post has been updated to reflect that Epstein was found unconscious in his jail cell and pronounced dead at the hospital.

#jeffrey epstein
#metropolitan correctional center
#sex offender
#sex trafficking
Do you know the scoop? Comment below or Send us a Tip