Jeff Yang On ESPN's Terrible Headline: Why Not "Hornets To JLin: Oh, Bee-hive!"

The controversy over ESPN.com's unfortunate headline about New York Knick Jeremy Lin's bad game against the New Orleans Hornets—"Chink In The Armor"—has led to, uh, lintrospection about how the media looks at Linsanity, as well as Asian-Americans.

Jeff Yang, the Tao Jones columnist for The Wall Street Journal Online, has been following Lin's ascent into the NBA for years (here's a 2010 column) and recently wrote a column titled, "Jeremy Lin’s Pop Culture Slam Dunk." We asked him what he thought about the imbroglio and this new territory of having an Asian-American basketball star.

What was your initial reaction to seeing the headline? My original impression when I saw the headline was frankly, "You've got to be kidding me." Actually, I think there was a "fucking" in there.

That a front-page ESPN story on the biggest sports phenomenon in the world right now, who happens to be Asian American, would have the word "chink" in its headline just seemed so incredibly implausible — so downright stupid; it had to be an awful coincidence, right?

And then it came out that the phrase "chink in the armor" was used not just there, but on ESPN TV and radio as well. It's like Auric Goldfinger's classic quote to James Bond: "The first time is happenstance. The second time is coincidence. The third time it's enemy action."

So I started researching and asking my network of friends both inside ESPN and elsewhere in the sports journalism world. Was this intentional? Did ESPN actually think this was clever, or funny, or, you know, not totally racist? Basically, I wanted to figure out if this was, in fact, enemy action.

And I've been assured on multiple fronts that both the headline and Max Bretos's offhand statement were more the result of sloppiness and thoughtlessness than intentional offense. Bretos, especially, seems to use the statement a lot, in circumstances that fortunately don't have any connection to Asians.

Oh, but as he points out, his wife is Asian. So, you know, maybe he should've checked himself a while back. You want to avoid trouble with the in-laws, right?

Cultural sensitivity isn't just about what you mean to say, it's about what people hear. It's especially important to have good verbal hygiene if you're a public figure with a huge megaphone like ESPN — and based on the comments that have been made by a lot of sports fans and a few athletes, there's a certain segment of ESPN's audience that probably perceived the use of the phrase as a kind of dog-whistle call.

That's the real reason why ESPN decided to drop the hammer so hard on these guys: They knew that this kind of thing can get out of control, fast. If there's even a tacit endorsement of racially questionable or stereotypical language from the "Worldwide Leader in Sports," well, apres "chink in the armor," le deluge.

Was ESPN right in firing the editor? I don't think [editor] Anthony Federico intended to use the term as a slur. But your job as an editor is to make sure that what you publish is clean, not just linguistically and stylistically, but from a cultural context. Ten years from now, no one is going to say, "Oh, Anthony Federico, that dude made a huge mistake"; but the front-page "chink in the armor" reference may go down in history as a massive gaffe on the part of ESPN, and that's a big problem for them.

Bottom line: Anthony Federico wasn't fired for being a racist, he was fired for making a massively bad editorial decision that potentially cost ESPN — that is to say, Disney — huge amounts of goodwill with key audiences in the U.S. and Asia.

And in an era where ESPN and Disney are avidly looking to expand into new markets, "goodwill" is a currency that looks a helluva lot like money. When you make the Mouse look bad, you burn. That's just smart, tough corporate behavior. It's how they roll.

Do you believe Federico's explanation that it was an "honest mistake"? Yes, but as I note above, I don't think it's all that relevant. And it certainly shouldn't save his job.

Do you think that non-Asians are aware of "chink" as a slur? Maybe not as much as they should be? I know that it's not a word that's commonly cited in the Great Big Book of Words You Shouldn't Use on the Teevee, but the legacy of the term is ridden with tragedy and atrocity. Entire mining camps full of Chinese immigrants were murdered based on the notion that they were just "chinks" — barely human, totally unassimilable and a threat to the American way of life. For centuries, the term was used as a diminutive, a displacement device, a damning expletive; and yes, it has other meanings, but you know, when it's placed next to a picture of a guy with an Asian face, it's hard not to invoke that lengthy history.

Hey, I have an idea: Why don't we find another word to use altogether? We've struck "niggardly" from the dictionary of the publicly acceptable, and that term doesn't even share the same roots as the ugly word it invokes. It was a game against the New Orleans Hornets, for crying out loud; why was "armor" even an appropriate metaphor? How about "N.O. says NO to JLin"? "Knicks get stung?" "Hornets to JLin: Oh, bee-hive!" THESE ARE TERRIBLE HEADLINES TOO. But at least they're not going to piss anyone off.

What do you make of Lin's "bow" to Carmelo Anthony? Eh, Jeremy has always had an under-the-radar sense of humor — he puts himself out there on best behavior, but he has a lot more self-awareness (and self-deprecation) in him that people think. Someone unearthed his old high school Xanga journal, which has him fooling around on a webcam, joking about how some NBA players wear their headbands. He's partnered with Ryan Higa, the YouTube star, to do a pretty funny video ("How to Get Into Harvard"). I think Jeremy was kind of playing to crowd expectations there. No harm, as it were, no foul. 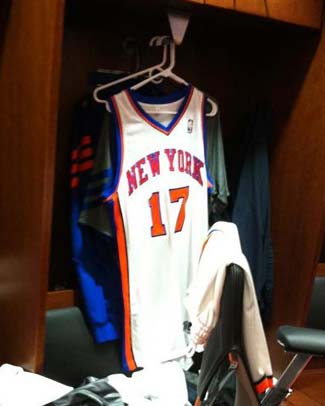 Photograph of Jeremy Lin's jersey in his locker by Jeff Yang
Do you think stereotyped/caricatured depictions of Lin—like the Good Fortune cookie or the Yellow Mamba sign—gathered less attention because at the time, Lin was winning? Or is it acceptable to expect some of it, given this is relatively uncharted territory?

Okay, let me put on my Star Trek junkie hat here and say that yes, a lot of this is due to us having gone where no fan has gone before. For Asian American athletes, this is the final frontier — not just succeeding at the highest level of sport in a major professional league, but actually dominating, and winning over teammates, critics and mass audiences by doing so. Jeremy's story is so totally unexpected and thoroughly engrossing, and his character is so...well, so adorable, that people just are running off the chain.

That includes many Asian Americans, for whom Jeremy's ascension has launched a kind of jubilee era. Friends of mine are calling it "our Obama moment." O-kay. I thought the election President Obama was our Obama moment! But I get it. I'm as Linsane as anyone. More than many. I just think that we have to, like Max Bretos above, check ourselves a little bit before we get ahead of ourselves.

For non-Asians, this is a test of the Emergency Ethnic Broadcasting System. Do media — and public figures — have the cultural infrastructure in place to not look like asses in public? The answer, in many cases, seems to be no. A little pre-emptive education and training would've stopped most of these flubs from ever happening in the first place...but now that they have, the response shouldn't just be about punishing scapegoats, it should be about putting effort and money into fixing the institution. Wouldn't hurt to make some real investment in outreaching to the community itself, either. Asian American communities don't want scalps — they want respect.

Also, re: ESPN sportscaster's Max Bretos's suspension, is having an Asian wife (or spouse) really a good excuse for why he didn't mean any harm? Uh, no. Max, Max, Max, I'm on your side, but "My wife is Asian" is the new "Some of my best friends are black." Just...don't. Love your wife, cherish her, and don't use her as a freaking human shield, kthxbai.