by John Del Signore
[UPDATES BELOW]

Former NBA player Jayson Williams was hospitalized with minor injuries earlier this morning after crashing his Mercedes-Benz SUV into a tree at the FDR exit at East 20th Street around 3:15 a.m. Though he hasn't been charged with DUI, police sources tell the AP they believe he had been drinking.

It appears that Williams may have tried to play it off as if he wasn't driving, because when first responders reached him, he was in the passenger seat. But because there was no one else with him, that ingenious ploy failed. Also, witnesses saw him in the driver's seat. Perhaps his bad-boy buddy Harvey crashed and hopped away?

UPDATE: An NYPD spokesman tells CBS that Williams was treated for a laceration to the forehead and refused a breathalyzer test. He's been charged with DWI. (We're still waiting for details on the extent of the tree's injuries.) Also, Fox 5 has "EXCLUSIVE!!!" video of Williams's damaged SUV. And the Star-Ledger notes that Williams is facing a second trial in the 2002 death of his limousine driver; he's accused of recklessly handling a shotgun that killed the driver at his estate, then trying to cover it up.

UPDATE 2: Please excuse the annoying watermark, but below is a photo of Williams supposedly taken late last night while partying with college kids at the Upper East Side bar Aces & 8s. 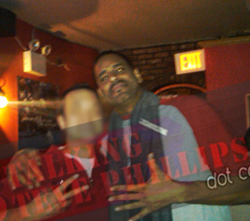 The website Stalking Steve Phillips says: "Our source claims to have seen Williams at Aces and 8’s drinking with a group of college kids. He was friendly and taking photos (more seen below.) Our source also claims that a member of his party purchased Williams at least 3 shots of Jameson." No, this really does not look too good. But maybe that's his "friend" who was actually "driving" the car? Also, the Post now reports that he fractured his neck!

#accident
#crash
#FDR
#jayson williams
#nets
#suv
Do you know the scoop? Comment below or Send us a Tip