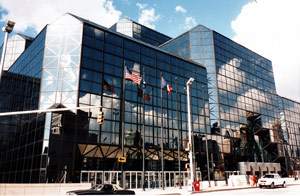 The proposed expansion of the Jacob J. Javitz convention center is essentially dead in the water as government officials admitted that the amount of money it would cost to undertake the project would not be worth the marginal return on investment that additional tax revenues would provide. Empire State Development Corporation chairman Pat Foye testified that about half of the expansion plan's $1.6 billion budget would be consumed just making repairs to the existing Javits structure.

Mayor Bloomberg took the announcement as an opportunity to criticize opponents of his West Side stadium plan, which was derailed in 2005. "If a handful of people hadn't been so selfish, we could have had a privately paid for, wonderful, big convention center that would have created opportunities for lots of people in this city who otherwise can't find jobs." The West Side stadium was the centerpiece of an attempt to bring the 2012 Summer Olympics to New York City.

As plans for a larger Javits founder, transportation advocates are fighting to get funding for the construction of a subway station shell at 41st St. and 10th Ave. as part of the planned 7 line expansion. Current plans call for the 7 line to be extended west to 10th Ave. before turning south to the proposed Hudson Yards development. The Bloomberg administration currently maintains that the marginal cost of constructing a shell where a future station could someday be built is too expensive. Outgoing Deputy Mayor Dan Doctoroff recently said the city would be willing to pay for half ($225 million) of the estimated cost for a station shell, but wants the state to pick up the rest of the tab.